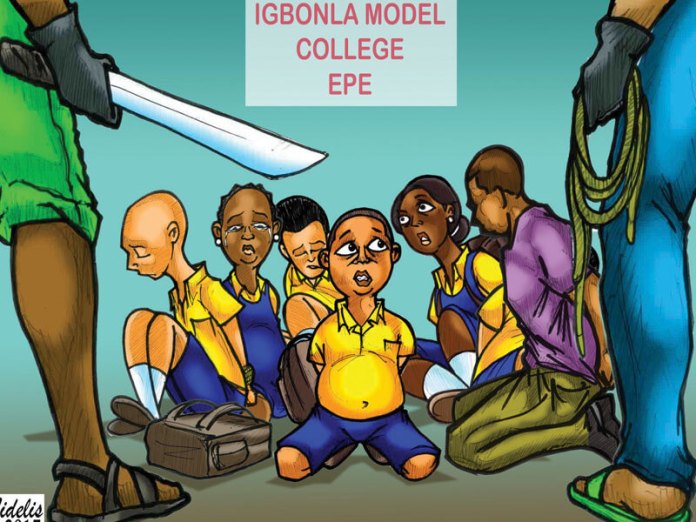 Although the male students Peter Jonah, Isiaq Rahmon, Adebayo George, Judah Agbausi, Pelumi Philips and Farouq Yusuf were initially hidden in the Lagos/Ogun creeks for weeks, they were later moved to Ondo creeks before they seemingly disappeared off radar.
The recent move by the kidnappers to cut off communication was after the affected parents paid N10 million out of the reduced ransom of N50 million asked for by the gang.

For the parents and management of the school, as each day goes by, so does their hope of the release of the boys wane, especially as the kidnappers have cut off contact totally with them.

Except for the case of the abducted school girls of Chibok Secondary School, Borno State, this is the longest duration abducted school children will remain in captivity in Nigeria since they were kidnapped on Thursday, May 25, 2017.

Given the seeming lackadaisical attitude of security operatives, the affected parents and well-wishers have begun their own advocacy to campaign for the release of their kids.

Already, an Instagram account has been opened to propagate the need for the release of the boys, while a hashtag #Free6LagosBoys was also created.

Given that the majority of parents believe that the police and the government have failed them, rather than fold their hands, they have resorted to creating a prayer chain.

Every day since June 19, the parents alongside several others who are sympathetic to their cause have taken up the challenge of praying at 6pm daily for six minutes.

Asides the prayers, the parents are also putting pressure on the government to step up their rescue mission and their demands are that the Lagos State Government put together resources to locate and rescue the boys.

Toyin Philips, one of the mother of the kidnapped boys, begging the government to act fast said, “I want my son back. I sent him to that school. If I had the money the kidnappers are demanding, I would not send my son to that school. They are in danger and are still missing. It’s too long for children to be far away from their parents but we will not stop believing and praying for their safe return.”
Another parent, Mrs. Agbaosi, said, “The government should please not let our children die. Let their release be done today.”

One of those championing the cause is safety advocate, Taiwo Akinlami, a social development lawyer and consultant to UNICEF and British Council, whose mantra is for safer school environment in Lagos.

In an interview with the press he said, “Although I am a private citizen, my commitment is to see the boys rescued.”
On the reaction of the state government to their campaign for the release of the boys he said, “In my contact with the government, they said they can’t disclose their strategies because it is a security issue.

“The important discussion is what we have put in place to prevent another reoccurrence. What effort is the government making to protect our school children because this is the second time this is happening in Igbonla? The larger issue is safety of our children within the school system. How safe are they? That is the narrative for us.”

Also speaking, Praise Fowowe said, “How safe is the African Child in Africa? We appeal to Lagos State Government to help secure the release of our boys.”

Lending her voice to the campaign, Pastor Nike Adeyemi of Daystar Christian Centre Church said, “How a society treats its children and the poor says a lot about it. Step up. #ChildProtection.”

Meanwhile, the Chairman of Lagos Neighborhood Safety Agency (LNSA), Israel Ajao, a retired Deputy Inspector General of Police (DIG), has assured of the boy’s safety. Ajao who is a also a member of the Lagos State Security Trust Fund, said the boys would soon be reunited with their families.

Speaking with crime reporters over the weekend he said Governor Akinwunmi Ambode was working hard to ensure the kidnapped students are not hurt by their abductors.