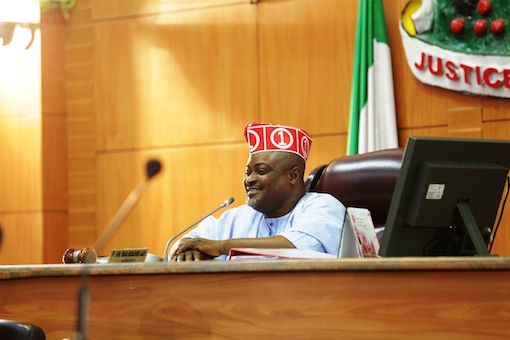 The Speaker of the Lagos State House of Assembly, Mr Mudashiru Obasa, has assured residents that all legislative activities of the House in 2018 will be in the interest of the masses.

“God has been instrumental to making our work here impactful; without God’s intervention, nobody can get the honour.

“We have done tremendously well in the year, as people’s representatives there are many legislations we have passed, bringing good developments in the state.

“We have only one job; to represent the people to make laws and we are ready to do that for the state maximally.

“I want to assure people that whatever law or resolution we make would be in the interest of the masses,” he said.

In his sermon on the theme, Revd Folarin Obey urged citizens to honour those in authority and give double honour to God and His servants.

Mr Victor Akande, the 15th Patron of the programme, who lauded the initiative, said that the Lagos Assembly would be better for it.

“Although we are in a festive period, I thank the speaker for this initiative; he is a man that loves and fears God.

“It is a programme we have been doing since his assumption of office, and whoever will praise God for what he has done will get more,” Akande, representing Ojo Constituency I said.

Another lawmaker, Mr David Setonji, said: “We are expected to thank God, and picking a date to celebrate his faithfulness is also a good idea.

“I am very happy that we, at the House of Assembly, have a time to thank God for his faithfulness for a whole year.”

Mrs Olubunmi Akinnaanu-Adeoye, the guest artiste, thrilled those in attendance with special songs.

Related Topics:LagosLEGISLATIVE ARM
Up Next