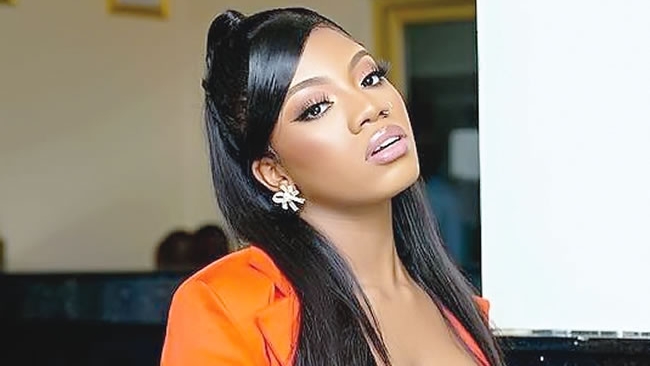 Former Big Brother Naija ‘Shine Ya Eye’ Housemate Angel Smith has tackled Nigerians who expressed sentiments over the interview of his colleague Saga.

TopNaija recalls that Angel Smith’s colleague, Saga received a series of mixed reactions after he cried out in an interview over the high house rent he has to pay because of his celebrity status.

In the interview, Saga spoke about the lifestyle and income changes he has experienced since leaving the Big Brother Naija House and how it will make the news headline if he ever lived with his parents.

The reality TV star said he paid N5.1 million on rent against the two hundred thousand he was paying before the reality TV show where he was sharing an apartment with his friends.

Adding to her colleague’s statement, Angel took to her Twitter handle as she stated that being a celebrity is quite challenging.

She also advised her colleagues who are trying to navigate around the platform to make ends meet not to cave the pressure or love themselves in attempting to please their fans.

According to Angel, many Nigerians expressing disbelieve over Saga’s situation are still the ones who will laugh if a former housemate is living with their parents or using public transportation.

She tweeted: Big hugs to everyone that went and came out and are navigating their way around the platform because it’s all that they have to make ends meet; it’s hard but remember who you are, don’t cave to the pressure and never lose yourself.

Y’all will be the first to laugh at ex big brother housemates if you hear they’re living in their parents house or if you hear they’re in public transportations, y’all will also pressure your faves so you can have bragging rights but today you people are acting oblivious.

“Who sent him message” “done leave above your means” etc etc but y’all will go to your faves dms and insult them if you don’t like their outfit, or compare them to your other faves “my fave gives me bragging rights” but yes, let human beings like yourselves not be pressured.

It is so easy to internalize the things people say unconsciously. The prayer is that you never ever lose yourself to people who constantly try to tell you what and who you should be.

Reactions as BBNaija’s Saga laments over paying N5.1M rent as a celebrity