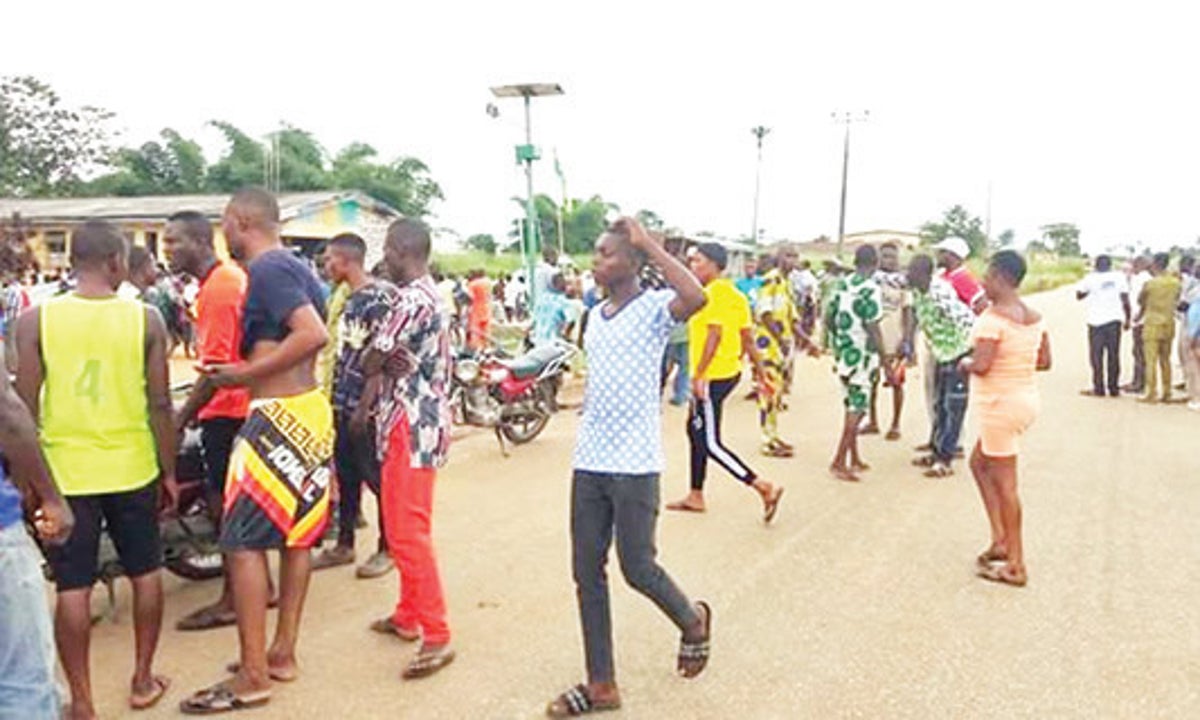 Alarige of Ibiade in the Ogun Waterside Local Government Area of Ogun State, Oba Bola Raimi, and his subjects have protested the alleged killing of a pregnant woman by policemen, TopNaija reports.

The incident, which sparked off a protest by youths in the area, happened around 7am on Thursday at Ibiade, Eti-Soore Close in the waterside area.

Our correspondent gathered that a commercial motorcyclist, who was conveying the pregnant woman to hospital for delivery, was stopped at a checkpoint by policemen attached to the Ibiade Police Station.

The traditional ruler, who spoke with our correspondent, said the deceased was hit in the head with a torch by one of the policemen at the checkpoint.

Oba Raimi said, “I learnt that the pregnant woman was in labour and she was being taken from her village to a general hospital.

“But, the policemen delayed them because of N100 bribe, and the okada rider decided to ignore them and moved on. It was in the process that they used torchlight to hit the woman in the head and she started vomiting blood.

“The okada rider tried to rush her to the hospital, but she passed away when they got there. The policemen killed the pregnant woman because of N100.”

Oba Raimi added that three policemen were involved in the incident. According to the monarch, the police Area Commander in Ogbere said the affected policemen had been arrested and would be transferred to the state command headquarters in Abeokuta later on Thursday or today (Friday).

The incident led to a protest by youths, who threatened to burn down the police station in the community.

It was gathered that it took the intervention of the traditional ruler and other prominent persons in the community to calm the youth.

A human rights activist, who hails from the area, Festus Ogun, told journalists that the pregnant woman, who was already in labour before getting to the checkpoint, was delayed for several hours by the policemen.

Ogun added that the woman was harassed by the police and she was unable to make it to the hospital before she died.

He said, “The true situation is that early this morning (Thursday) before dawn, the woman was in labour and she was already bleeding and was being conveyed to hospital.

“On the way, the motorcyclist conveying her was stopped by officers of the Nigeria Police Force; she was delayed for hours and it was that delay that led to the death of the woman.

“The woman was in serious labour and the policemen delayed her because of the lockdown and that led to the unfortunate death of the woman.

“The woman died with the baby in her womb; her corpse was taken to the king’s palace. I think she died in between the checkpoint and the hospital.”

Ogun demanded that justice must prevail and the policemen involved must be punished. When contacted, the state Police Public Relations Officer, DSP Abimbola Oyeyemi, confirmed the incident.

Oyeyemi, however, denied the allegation that the police were responsible for the pregnant woman’s death.

The PPRO explained that the woman was only delayed for a few minutes so as to be sure that she was not being kidnapped.

According to him, a motorcyclist was conveying a pregnant woman before dawn and policemen, who were enforcing the curfew, stopped them and asked where they were going and they said the woman was in labour and was being taken to hospital.

“She hadn’t even given birth before she died; so those people came back and said that the policemen, who stopped them at the checkpoint, delayed them from getting to hospital earlier and that they killed her. How is that possible?”

Oyeyemi said the Divisional Police Officer of the station informed him of the situation. He stated, “They were stopped truly to know where they were going and I don’t think the policemen went beyond their power so; what if they were kidnapping the woman for ritual?

“Don’t we have the right to stop them? We saw someone in the night conveying a pregnant woman. It is the duty of the police to question the person and they explained and the policemen let them go.

“The delay for questioning wasn’t up to five minutes, according to the DPO. Are policemen not human beings that they would now see a pregnant woman and deliberately delayed her, for what?”

How Pakistani plane crashed with over 100 passengers