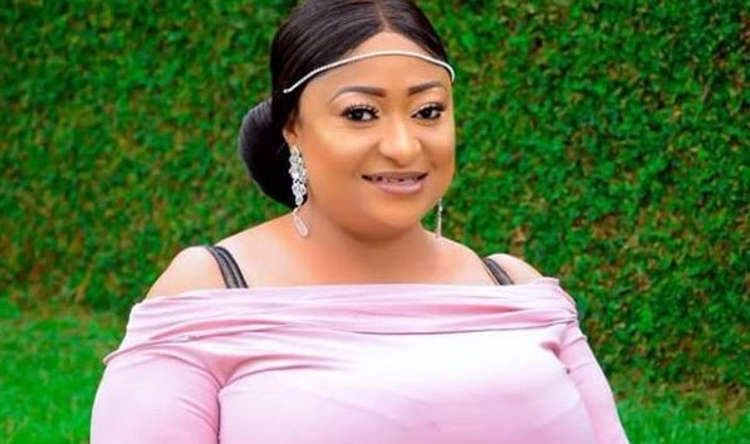 You started acting at 23. Did your parents support you?

At that time, most parents did not readily allow their children join the theatre (movie industry). My father was an alumnus of Obafemi Awolowo University. He was a very knowledgeable man. On the other hand, my mum was a grade two teacher. When I told them I wanted to stop going to school, I knew there would be issues. But, I had to support my parents’ earnings. My father was facing some challenges at the time. It was tough paying my school fees because of the lack of funds. However, they wanted me to go to school by all means. I told them I would continue my academics at a later time. My dad did not take it lightly but he finally succumbed.

You got your stage name, Oshodi-Oke, from a movie. Did it have anything to do with your body?

I got the name from a movie I acted around 1999, and it had nothing to do with my boobs. The movie was set in Oshodi-Oke, Lagos. Since then, the name has stuck to me.

Why did you decide to ‘redefine’ your brand?

Rebranding is normal. At some point, everyone in the entertainment industry would want to go through a ‘rebranding’ process. That is why I deleted all my Instagram posts and started afresh.

You have been in the movie industry for 23 years. How would you describe the experience?

I thank God for my journey. So far, it has been a wonderful one. 23 years is not a joke. I often tell people to make sure they enjoy whatever they do. I do not have any regrets. I am doing what I like to do best and I’m getting paid for it.

People say that Nollywood is not lucrative. Do you agree?

If a pregnant woman falls ill, the child in her womb would also be sick. It is hard for me to say this but Nigeria is a sick country, so some things that come out of it would be ill as well. If you are in the entertainment industry, just enjoy what you do and have a side business.

Side businesses just became common in the entertainment industry in recent times. Sometime ago, acting was a full-time job for most actors. Why do you think that changed?

The movie industry has never been lucrative but as one grows, responsibilities and expenses naturally increase. One would need more money and would have to do other things to augment one’s career.

What are the highlights of your career?

The highlight of my career was when I did a comedy movie titled, Gbajumo, 15 years ago. Though I was already known but after the movie was released, I became more popular. It opened my eyes to my comedy talent that I didn’t know existed.

What has been the lowest point of your career?

I have never had a low point. But in recent times, I have not been acting as frequently as before. It is a personal decision though. I don’t want to appear everywhere and become predictable.

What were the things that made you want to give up in the early days of your career?

Because of the passion I have for acting, I have never thought of giving up at any point in my 23-year career. I don’t have any regrets. I have always enjoyed my job. Acting could be a tedious job, despite how interesting it appears to be. If one is not hard-working, one cannot do it. Meanwhile, if one is constantly working, one would not have time for oneself, talk more of family. One would not even think of anything other than the job.

What has fame deprived you of?

I can no longer live like a regular person. The last time I went to the market, the experience was not palatable. Also, the last time I took my kids to the beach and cinema, it felt very weird. I still go on outings with my kids but the experience may not be enjoyable for them because some of my fans would want to take pictures and I cannot refuse them, even if I am not feeling so good. We all have such moments. But, people do not seem to understand. One would be judged if one doesn’t laugh in public.

However, one has to make sure one does not allow popularity to rob one of living one’s best life. Also, I have never called myself a star. The day one starts seeing oneself as a star, one would begin to lose focus and get distracted.

Does being an actor make life easier for you?

It does. I consider myself fortunate for being an actor.

What are some of the principles that have helped you in the movie industry?

God has been my greatest helper. Also, I don’t live above my means and I try to be honest in all my dealings. Some people think that if one is into showbiz, one would have to show off. But, I love being myself. Being an actor can be taxing but I deliberately take things easy.

Do you have a godfather or godmother?

I do not have a godfather or godmother. I don’t belong to any group or clique either. Although godfathers may have helped some people, God has always provided help for me. However, I have father and mother figures in the movie industry.

Do you plan to retire from acting someday?

There is no retirement in acting. I know that veterans like Idowu Phillips (Iya Rainbow), Jide Kosoko, Adebayo Salami (Oga Bello), Toyin Afolayan (Lola Idije) and Fausat Balogun (Madam Saje) are still acting. As long as one has the energy and one is healthy, one can continue acting as long as one pleases. I pray for longevity, so I can act till a ripe old age.

Why do you cry so easily in movies?

I am a very emotional person, beyond my job as an actress. When I am acting emotional scenes, I cry naturally because I usually submerge myself into roles. I would have read and mastered the script, and I would become emotional.

What is the least amount you have been paid?

The lowest amount I have received for a movie is N1,500 in 1998. It was not a lot of money but for my level at the time, it was a big deal. I did not have plenty responsibilities, so the money seemed quite a lot to me.

Why don’t you flaunt houses and cars on social media like many of your colleagues?

I don’t flaunt wealth because I don’t have what to show off. I don’t think material possessions should be flaunted on social media. There are many people who cannot afford three square meals in Nigeria. There are lots of youths who have become ‘danfo’ drivers. When I look around, I am filled with gratitude. If I show off, it would seem I am telling people that they are not as hard-working as I am. People say many actors flaunt wealth but I choose not to do that.

Does your husband restrict you to certain roles?

My husband is a very understanding person. He is not a movie lover. When he met me, he did not even know I was an actor. On the day he visited me and he was seeing me off, some people started staring and pointing at me. He asked me why that was and I told him my profession. At times, we have watched films together and he saw something he didn’t like and he expressed himself. He loves watching documentaries and watches the news avidly. He is not even a football enthusiast.

How does your family cope when you have to be at movie locations at odd hours?

My mother and sisters have been very helpful. They take care of my family when I am working. However, when I am not at locations, I make sure I stay at home all through. I live like a housewife. In recent times, I don’t even go to all locations.

Did you deliberately not marry an actor?

It was not deliberate. As a young lady, I thought marrying an actor was the best option. I felt there will be a better understanding between the couple because they would both understand the profession. However, I later figured that it would not work, and I am grateful for my decision. Both parents in a family doing such a time-consuming job would not work. There are likely to be problems.

You’re a Master of Ceremonies and it seems you like attending parties. Is that right?

What you see on social media is different from who I am. Most parties I attend, I go for MC jobs. I am not a ‘party freak’ at all. I can be a very boring person. I prefer close-knit parties to loud ones.

Some people believe that Yoruba actors are fetish because many movies portray that?

It is because of the language we speak and our culture. Islam and Christianity are borrowed from overseas. Our forefathers were traditional worshippers. The traditional films we act could give people the impression that we are fetish. But, any actor could be fetish, irrespective of whether they act English or Yoruba movies. You would be shocked to meet some actors in some funny places. I strongly kick against anything diabolical to kill or harm anyone. In my father’s family, they have seven types of masquerades but my grandfather became a Christian before he died. I would not belittle my culture because I am a Christian. Many people have forgotten about cultures completely and that is not good. I am not an idolater but if there is a cultural celebration and I am invited, I would attend if I have the time. It is good to respect our traditions.

Some people have called you a local actress because of some of the roles you’ve acted. How does that make you feel?

Everybody has a right to his or her opinion. It is more about how one sees oneself. I am not a local actress and I don’t see myself as one.

What are your hobbies?

I listen to music, watch television programmes and love to dance.

What sports do you engage in?

I love to wear both traditional and English attire.

What is your favourite food?

Eba and fish head. I can cook ‘anything’ because I am a foodie. I was a voracious eater when I was younger but now, I don’t eat that much.

Related Topics:featureRonke Oshodi Oke
Up Next

How my parents’ height made me love tall guys –Asa