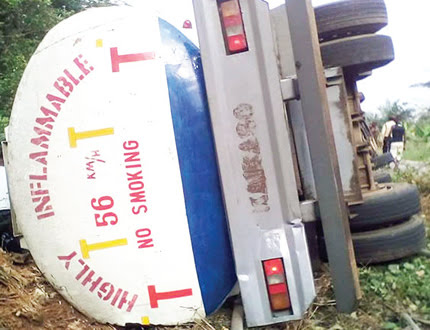 An unknown Okada rider has been trapped under a 33,000-litre tanker after the vehicle fell on its side on the Apapa Oshodi Expressway, in the Amuwo Odofin area of Lagos.

The Director, Lagos State Fire and Rescue Service, Margaret Adeseye, disclosed this in a statement on Tuesday.

Adeseye noted that the tanker had lost control while in motion, causing it to fall on its side and spilling its content, adding that efforts to rescue the trapped man were ongoing.

“The incident is being mitigated by the Ajegunle Fire Crew of the Agency and has it under control with no palpable cause for alarm.

“An adult male motorcyclist is however trapped beneath the tanker as efforts are ongoing to recover him.”