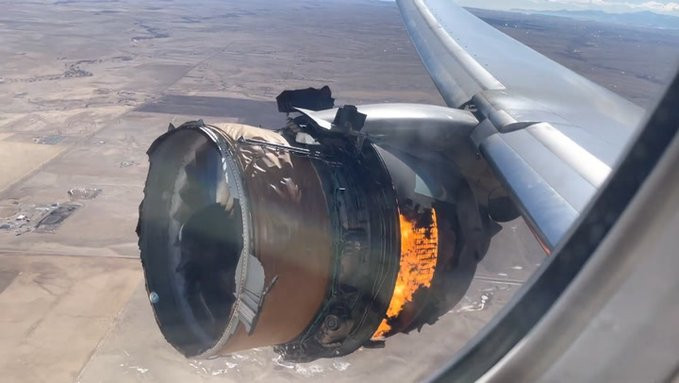 A United Airlines flight has been forced to return to Denver International Airport to make an emergency landing on Saturday afternoon, February 20th, after the engine caught fire shortly after takeoff, sending aircraft debris on people’s houses in Colorado.

The Boeing 777 which had 241 people on board returned to the airport around 1:30 p.m. after suffering an engine issue. The flight had been bound for Honolulu.

The Federal Aviation Administration confirmed in a statement that the Boeing 777-200 safely returned to the Denver International Airport after “experiencing a right-engine failure shortly after takeoff.”

“The FAA is aware of reports of debris in the vicinity of the airplane’s flight path,” the statement said.

The flight returned about 20 minutes after the police department in Broomfield, Colorado, said via Twitter that it had received reports that an airplane flying over the Denver suburb had engine trouble and had “dropped debris in several neighborhoods around 1:08 p.m.

Though no injuries were reported, Police said debris landed in Commons Park and the Northmoor and Red Leaf neighborhoods of Broomfield.

Images from the scene showed large pieces of debris lying in the front yards of homes and a soccer field at the local park.

United Airlines told CNN there were 241 people, including 10 crew members, aboard Flight 328. All passengers were safely deplaned and transfered on a new flight.

“United Flight 328 experienced an engine failure and safely returned to Denver. We are in contact with the FAA, NTSB and local law enforcement,” United Airlines said in a statement. “The NTSB is investigating and has directed that any persons with debris from this event contact their local law enforcement agency.”

The union representing United pilots commended the crew of Flight 328 and said Saturday “there is no substitute for experience.”

“We are thankful for the tremendous teamwork shown by the entire flight and cabin crew, and that there were no injuries on the ground or in the air,” the United Master Executive Council of the Air Line Pilots Association, International told CNN in a statement.

“NTSB has opened an investigation into the Feb. 20, 2021, engine event on a United 777. Denver-based NTSB investigators are responding,” NTSB public affairs officer Peter Knudson said in a statement.

This is coming hours before a military aircraft crashed at Abuja airport, in Nigeria, kills 7 passengers on board.