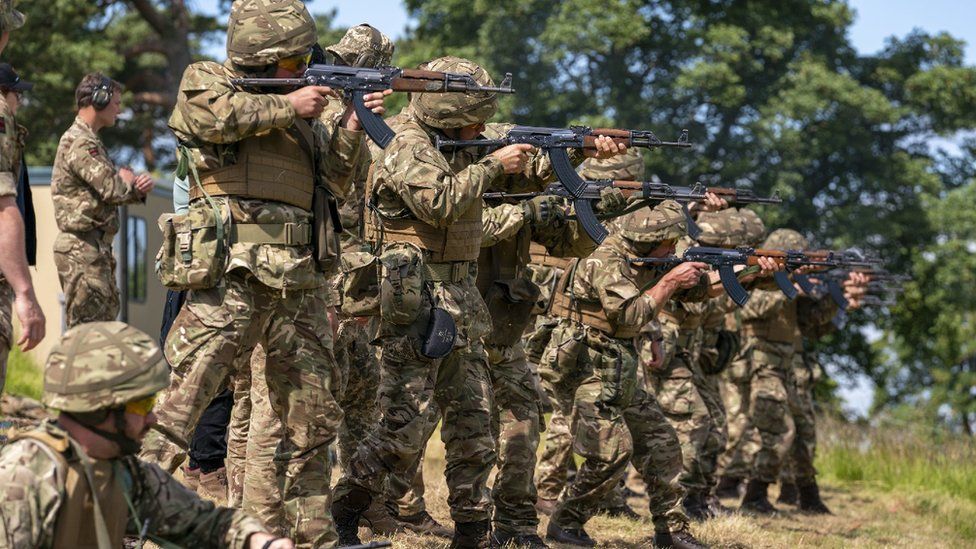 Ukrainian President Volodymyr Zelensky has made an unannounced visit to the front-line city of Bakhmut, where Ukrainian and Russian forces have fought battles.

He handed out awards to the soldiers.

For months, Bakhmut has been a key target for Russian forces in the eastern Donetsk region, and has been extremely badly damaged.

However, Ukrainian forces have been able to hold back the advance.

The visit is a significant show of defiance – and a demonstration of support for Ukrainian forces engaged in some of the fiercest battles in recent weeks.

His trip will be compared with recent public appearances by the Russian President Vladimir Putin – who on Monday travelled to Minsk for the first time in more than three years to meet Belarusian leader Alexander Lukashenko, a long-time ally.

The two leaders spoke of increasing military co-operation, amid talk of a growing threat of another potential attack on Ukraine from Belarusian territory. In last February’s invasion, some Russian units attacked Ukraine from the north through Belarus.

However, a senior US state department official told the BBC that there were conflicting views in the Russian government about whether to launch a winter offensive.

He also said the US was also seeing “very significant” shortages of ammunition for Russian forces and noted that the people being “thrown into the fight” were not trained cohesive units, which limited their effectiveness.

All that “puts constraints” on what the Russians might want to do, he added.

Returning to Moscow on Tuesday, Mr Putin urged the security services to increase their vigilance in exposing “traitors, spies and saboteurs”.

He told them to ensure the “safety” of people in Ukrainian territories illegally annexed by Russia in September, adding that the situation there was “extremely difficult”.

“I think that the heroes of Bakhmut should have what every person has, that everything should be OK for their children, their families, that they’re warm and healthy,” he said.

“I’d like to wish them light, but it’s such a difficult situation that there is light and then there isn’t. The main thing is for there to be inner light.”

He said the Russians had already lost 99,000 troops in the war. However, this figure cannot be independently verified, and neither Russia nor Ukraine have revealed the full extent of their casualties.

Mr Zelensky added: “Since May, the occupiers have been trying to break our Bakhmut, but time goes by and Bakhmut is breaking not only the Russian army, but also the Russian mercenaries who come to replace the wasted army of the occupiers.”

He was apparently referring to the shadowy Wagner mercenary group, which has been active in fighting near Bakhmut.

Presidential spokesman Serhiy Nikiforov said Mr Zelensky had left the city before his visit was announced.

The president has previously visited other recently liberated cities, such as Kherson and Izyum.

Bakhmut has been devastated by months of Russian bombardment
Bakhmut has been a focus of the Russian campaign for months and Moscow has thrown huge resources into capturing it.

It could open the way to Sloviansk and Kramatorsk, the most important cities in the Donbas region still under Ukrainian control.

But with Ukraine strengthening its defences in the surrounding area, it is thought that any Russian victory here now would be only symbolic.

Both sides have sustained heavy losses, leading both Russian and Ukrainian commanders to describe it as a “meat grinder”. Few civilians are now left in the city, which had a population of 70,000 before the war.

Today is the 300th day since Russia’s invasion of Ukraine. Deputy Defence Minister Hanna Malyar, who also visited Bakhmut, wrote on Facebook: “What are 300 days in our more than 300-year struggle for liberation from Russia!

Killer Of Atatiana Jefferson Has Been Sentenced In Jail