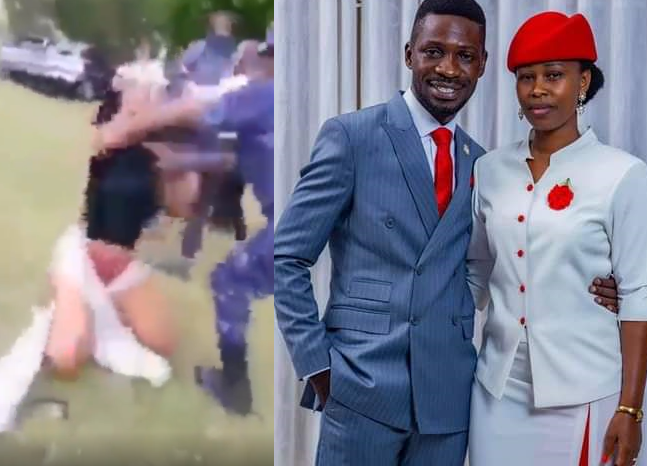 Her husband, who is currently serving as a Member of Parliament for Kyadondo County East constituency is hoping to unseat President Yoweri Museveni, who has been in power since 1986, as Uganda head to the polls on Thursday, January 14.

In a video shared on Twitter by Anyamah Douglas, a Ugandan National, a woman believed to be the wife of the presidential candidate Bobi wine, can be seen being led away by some security officers

At one point, she is seen struggling with the police officers before she was stripped to her underwears in front of her son after being pushed to the floor.

In April 2017, Kyagulanyi announced his candidacy for parliament in an upcoming by-election for Kyadondo County East constituency. His door-to-door walking campaign attracted attention both in Uganda and abroad.

In 2018, Kyagulanyi gained increasing fame, championing the victories in most of the by-elections by the candidates he campaigned for, thus beating out NRM and FDC candidates.

Ugandan officials had earlier ordered internet service providers to shut down social media and messaging applications on Tuesday. The move comes two days ahead of the country’s presidential election which will see one of Africa’s longest-serving leaders, Yoweri Museveni, against opposition frontrunner and popular singer Bobi Wine.

Third Mainland Bridge to be completely closed for 2 weeks – LASG