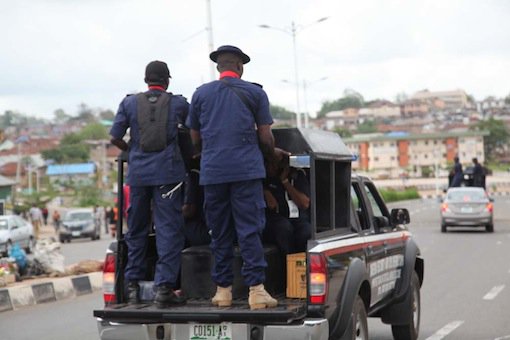 The Nigeria Security and Civil Defence Corps, NSCDC, has uncovered a suspected ritual killers’ den at the Aleyo settlement on Ojoko Road, in Asa Local Government Area of Kwara State, TOPNAIJA.NG can confirm.

The state Commandant of the NSCDC, Mr. Ayinla Adeyinka, who spoke through the command’s Public Relations Officer, Mr. Ayodele Bello, disclosed this in an interview with newsmen in Ilorin on Monday.

He noted that two suspects, Mr. Kazeem Absdulsalam (54), of Omu-Aran, in the Irepodun LGA, and Mr. Adamu Hussein (36), of Marafa Oja, in the Ilorin East LGA, were apprehended at the scene.

The NSCDC boss said the agency visited the scene following a complaint by a victim, Mr. Muminu Abdulrahman.

He said Abdulrahman had reported on Saturday that he had been duped to the tune of N5m by the suspects.

According to him, the NSCDC team discovered many shrines and other gory objects at the scene.

Adeyinka said: “It was a case of ritual activities and money doubling under false pretences and extortion. The complainant filed the case on March 24, 2018. He said about N5m had been extorted from him.

“When we got there, we saw some gory scenes at the shrines. Among the things we saw were the Alaragbo shrine, Abiku shrine, Iguni shrine, Baba Esu shrine, Baba Agba shrine and a lot of other things. The sight was appalling.

“From our investigation, it was clear that they had been carrying out ritual activities and collecting money from their victims under false pretences.”

Adeyinka, however, warned members of the public to avoid falling prey to fraudsters and ritual killers.