Man crushed to death as billboard falls in Aba

Customs intercepts N200m worth of goodsfrom smugglers in Katsina 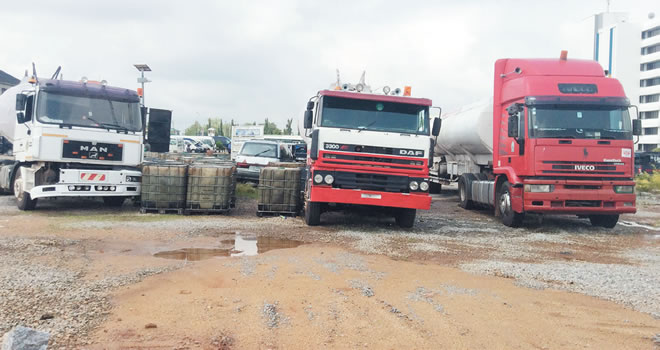 There was gridlock at the Lokoja end of the Abuja/Lokoja Expressway on Tuesday as the driver of a J5 commercial bus was allegedly beaten to death for not paying N500  demanded by produce officials on time.

Eyewitnesses told our correspondent that the produce officials pounced on the driver for not bringing out the money on time.

It was gathered that the beating continued even after the man had become unconscious.

A source alleged that the driver was even stabbed.

Angered by the killing of the driver, other truck drivers blocked the highway and insisted on seeing the state governor.

The incident caused panic as motorists travelling to other parts of the country could not do so for several hours.

While confirming the incident, the Kogi State Police Command said its personnel had been dispatched to restore law and order in the area.

The Police Public Relations Officer in the state, William Aya, told our correspondent on the telephone that the J5 bus driver was stopped by the produce officials and asked to pay the statutory N500, but along the line, they had issues, which led to an altercation, and in the process, the driver was stabbed and he died on the spot.

This, he said, infuriated other commercial drivers, who blocked the highway, leading to the gridlock.

He stated that the state Commissioner of Police, Ede Ayuba, summoned the warring parties and the family of the victim to a meeting in his office, where he appealed for calm.

According to him, some of those involved in the fracas have been arrested, while the area has been cleared and free flow of traffic restored.