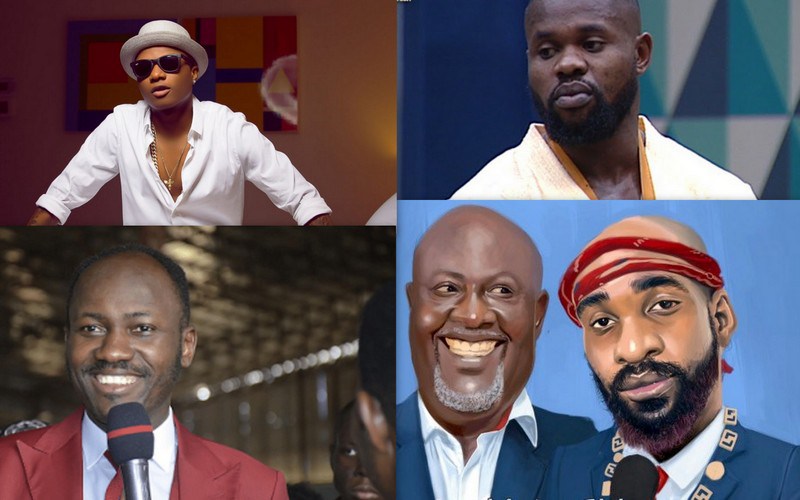 The outgoing 2017 has been such an interesting year so far. From goofs, controversies to scandals, there was not one dull moment. For the social media loving Nigerians, some personalities made the year an even more exciting year with their urge to share just about anything and everything online. Here, PREMIUM TIMES presents you the top 20 viral social media moments of 2017 in no particular order.

The overseer of the Omega Fire Ministries, Johnson Suleman, became the butt of Internet jokes in March after he was embroiled in an alleged sex scandal with a Canada-based lady, Stephanie Otobo. Internet users poked fun at Mr. Suleman after Stephanie revealed to the media that her affair with the cleric involved a lot of sex. Speaking at a press conference in Lagos, she said that she had a nice time with Mr. Suleman in Naples, New York, and Lagos.

A popular Nollywood big girl, Daniella Okeke, was also alleged as having benefitted from the cleric’s benevolence.

It was alleged that Mr. Suleman acquired a N160 million duplex located in Mende Maryland, Lagos and a $76,000 brand-new Mercedes-Benz 450 GL for the actress and that they had been neck deep in a relationship.

Ekemini Ekerette, a.k.a Kemen, one of the #BBNaija housemates was disqualified from the TV reality series in March.

He was caught on camera on Saturday night touching fellow housemate Tboss while she was asleep.

Kemen, who had been trying to be romantically close to his fellow housemate, TBoss, at the time with no luck, waited for all housemates to fall asleep before performing the act.

The embarrassing episode was captured on live TV.

He beat the multi-talented Bisola to win the N25 million star prize, a brand new Kia Sorento SUV, amongst other mouth-watering prizes.

Efe, an upcoming rap artiste, appeared to be the favourite of so many Nigerian celebrities. The Big Brother Nigeria 2017 began in January.

Controversial Canadian Matharoo sisters, Jyoti and Kiran, were revealed as the brains behind NaijajistLive, a popular website and Instagram page.

The account was known for exposing ‘big boys’ and commercial sex workers as well as their patrons. After the revelation, the sisters released a confession, apologising to Femi Otedola and family for cyber-bullying them as well as other highly places Nigerians whom they had blackmailed and extorted.

In 2017, one of Nigeria’s most popular radio presenters, Ifedayo Olarinde aka Daddy Freeze, was one man that many loved to hate.

All year round, his unfiltered comments on tithes made him a tabloid favourite. Daddy Freeze is widely known for his strong views on religious doctrines – especially tithing – and his #FreeTheSheeple movement remains one of most talked about topics of 2017.

He shared his views openly on tithing and this caught the attention of many people including Pastor Enoch Adeboye, Pastor Mathew Ashimolowo amongst many other persons.

After almost a year after a public spat and attempted suicide, pop star, Tiwa Savage and hubby, Tunji Balogun aka Tee Billz ‘officially’ came back together.

They publicly appeared together in church with their son, Jamil, in March 2017.

Actress, Moji Olaiya’s death after she reportedly suffered a cardiac arrest sent a shock wave across the Nigerian entertainment industry.

When photographs of the late actress on her death bed found its way to Instagram, it was greeted with a lot criticism from her fans and colleagues.

Olaiya’s housekeeper, Mrs. Keji, who described herself as a very close friend of the deceased, claimed in an interview that the actress’ sudden death could be a spiritual attack.

According to her, in the last three days before she passed away, the actress had placed several calls from her base in Canada to complain of “being uncomfortable”. The 42-year-old star actress was the daughter of legendary Nigerian highlife maestro, Victor Olaiya.

She welcomed her first child in Canada two months ago before she passed on. She also had a 20-year-old daughter who is an undergraduate of Babcock University.

8. Pretty Mike and his chained escorts

A popular Lagos club owner, Mike Eze-Nwalie Nwogu, A.K.A Pretty Mike, caused a stir online after he attended a wedding with two ladies whom he chained to the neck.

While that was not the first time the 30-year-old entrepreneur who is the co-owner of Club Uno, formerly Q Club on Allen Avenue, Ikeja, Lagos, will step out in this weird manner, this time his actions caught the attention of concerned Nigerians.

Pretty Mike made headlines the first time in December 2016, after he stepped out with his girls on a dog leash for the first time. A few days ago, he got himself a pet baby python and named it (wait for this), Toke Makinwa.

Nollywood actress, Oge Okoye, trended on social media in March after a photo she posted on her Instagram page appeared not to be her original photo.

The actress was called out by a fan page of American reality TV star, Kenya Moore, for posting a photo of two dogs on Instagram.

It turned out that the photo was originally posted on Kenya Moore’s Instagram page in February.

The singer however declined to reply the user. Instead, he muted comments on the said photo and later posted a cartoon image making humour out of the entire episode.

The Economic and Financial Crimes Commission, EFCC finally revealed the identity of the handler of its witty Twitter account.

However, the unveiling was mixed with irony as the anti-graft agency also disclosed that F. Shaw would no longer handle the account.

For almost a year, the identity of the handler was top secret such that even staff of the EFCC was unaware of the face behind the handle. In just a few hours after his identity was disclosed, F.Shaw’s Twitter followers increased from barely 2,000 to over 13,000.

A Federal High Court in Abuja ordered the Kaduna State Governor, Nasir El-Rufai, and three others to pay N40 million as damages to the president of Chocolate City Group, Audu Maikori.

The judge, John Tsoho awarded the costs as compensation for what he ruled as Mr. Maikori’s unlawful arrest and detention between February 17 and 18, and between March 10 and 13.

The judge was delivering judgement in the fundamental human rights enforcement suit filed by Mr. Maikori on May 5.

Mr. Maikori, 41, was first arrested in Lagos on February 17 after a petition was filed by the Kaduna State Government over a story he published on his social media pages that turned out to be false.

13. Bobrisky falls out with his celebrity gateman, Jacob

Nigerian Internet personality, Idris Olanrewaju, otherwise known as Bobrisky, accused his ‘famous’ gateman, Jacob, of trying to sell him out for N2 million.

Bobrisky took to his Snapchat handle to call out Jacob, accusing him of trying to sell him to his haters.

The cross dresser also said that his gateman lied that his father was ill. He said that he gave Jacob the sum of N65,000 to go and take care of his sick father only for him to find out that he was staying with his friend in Lagos.

In the video, Banky W tries to give a shout-out to his fans, showing them his lodge and Zebra right outside his bedroom window.

However, unknown to him, his wife was in the bedroom, naked. The video had gone viral when fans drew the attention of the singer to the video.

Banky W, quickly deleted the video but it was too late. It was already on the gossip tables of thousands as many devoured it.

Starboy, Wizkid, 27, welcomed his third child, a boy, with his manager, Jada Pollock.

Dbanj and his wife Didi delivered their first child, a boy in the United States.

Nollywood actress, Funke Akindele Bello, clocked 40 in August and was treated to a surprise birthday party organised by her husband, Abdul Rasheed-Bello a.k.a JJCskillz.

Funke who debuted her baby bump at the event has reportedly lost the pregnancy.

Controversial Nollywood actress, Caroline Danjuma revealed that he was in a romantic relationship with the late Tagbo Umeike.

The actress, who had initially accused Davido of killing Tagbo, disclosed that she met the late Tagbo after her divorce, when her daughter was three years old.

The senator, representing Kogi West has also made history as the first Nigerian serving lawmaker to be featured in a music video.

Not a stranger to controversy, shortly after the Senate committee on Ethics and Privileges cleared him in the certificate scandal in April, Dino, uploaded a humorous video of himself singing ‘Ajekun Iya’.

The song went viral on the Internet, with different versions posted on social media.

More than 500,000 people joined in the Instagram praise and worship in an hour-long midnight gathering, which is the brainchild of Nigerian gospel singer Nathaniel Bassey.

It all started with a simple post on his Instagram page on the 31st of May, where Bassey signaled his intention to start a 30-day midnight praise challenge throughout the month of June.

At its peak on Monday, CNN observed that around 68,000 people joined the Instagram livestream, while over 50,000 joined the Facebook livestream.

Related Topics:SOCIAL MEDIA MOMENTS 2017
Up Next

VIDEO: It Takes To Keep Her Marriage – Chioma Chukwuka-Akpotha