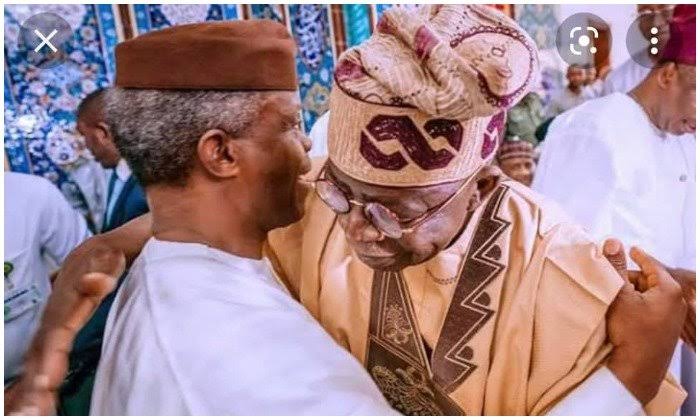 The presidential candidate of the All Progressives Congress, Asiwaju Bola Tinubu, on Thursday had earlier visited the President at his residence in the Presidential Villa and he decided to pay a surprise visit also to the Vice President, Prof. Yemi Osinbajo.

Asiwaju was accompanied by the Lagos State Governor, Babajide Sanwo-Olu.

It was reported that the VP was meeting with Senator Kabiru Gaya; former Defence Minister, Major General Dan Ali (retd), and other associates at the time Asiwaju arrived.

The VP warmly received Tinubu with other guests.

At the APC presidential primary, which started on Tuesday and was rounded off on Wednesday, Tinubu garnered 1,271 votes to clinch the party’s presidential ticket.

The Chairman of the Convention Election Management Committee, Governor Abubakar Bagudu of Kebbi State, at the Eagle Square, Abuja, announced that a former Minister of Transportation, Rotimi Amaechi, got 316 votes; Osinbajo, 235 votes; a former Minister of State for Education,  Chukwuemeka Nwajiuba, one vote; Senator Rochas Okorocha and Pastor Tunde Bakare got zero vote each.

JUST IN: Policeman allegedly killed over bribe in Ibadan