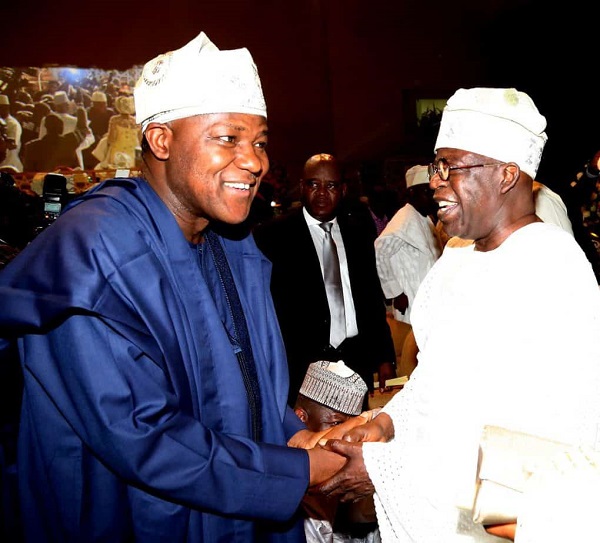 Nigerian speaker of the house of representatives, Yakubu Dogara, has accused Bola Tinubu, a national leader of the All Progressives Congress (APC), of pursuing a fascist agenda, TOPNAIJA.NG reports.

Reacting to Tinubu’s allegation that he and Senate President Bukola Saraki frustrated the government of President Muhammadu Buhari by padding budgets, Dogara said the APC leader cannot substantiate his claim.

In a statement issued on his behalf by Turaki Hassan, his spokesman, Dogara accused Tinubu of painting his office in a bad light.

“We have noted the statement issued on April 21, 2019 by Asiwaju Bola Ahmed Tinubu wherein he stated his reasons for sponsoring or supporting some aspirants to various leadership positions in the forthcoming 9th Assembly,” he said.

“Ordinarily, this would not have elicited any response from His Excellency, the Speaker of the House of Representatives, Rt Hon Yakubu Dogara, as Asiwaju is entitled to sponsor those he believes will have no choice but answer to his dog whistles anytime he blows same in his capacity as the self acclaimed National Leader of his party.

“If Asiwaju had confined his intervention to stubborn facts, this response would not have been necessary. He, however, used the opportunity to manufacture falsehoods and paint a non-existing picture of the stewardship of Mr Speaker and the work of the 8th House of Representatives under his watch. It is therefore, incumbent on us to set the records straight for posterity.

“We do not expect Asiwaju Tinubu to dwell on brazen mendacity, much less murder facts and decorum in his rabid bid to justify his patently clear facist agenda of controlling all levers of power in Nigeria. Asiwaju Tinubu’s nocturnal agenda has no parallel in the history of any democracy and it is more loathsome when he throws caution to the winds and maligns government officials who are doing a yeoman’s job of stabilising the government of President Muhammadu Buhari, even in spite of political differences.”

The speaker said he has made more contribution to the government of Buhari than Tinubu, saying the APC leader’s “pretentious loyalty” will soon be exposed.

Dogara said it is possible that Tinubu is still bitter that he defeated Femi Gbajabiamila, Tinubu preferred candidate for speakership position in 2015.

“It is on record that the Rt. Hon. Speaker has done more to stabilize this government more than Asiwaju Tinubu and his ilk whose stock in trade is scheming, manipulation and subversion especially when they feel they cannot be caught,” he said.

“When the history of Buhari’s administration is written by those who know the truth of what really transpired in the last four years, Asiwaju’s pretentious loyalty to President Buhari will then be exposed. We won’t say more but no matter how long it may last, the truth will one day overtake lies.

“Perhaps, Asiwaju is still bitter about the leadership contest for Speakership of the 8th Assembly, even though the actors have moved on culminating in Speaker Dogara magnanimously facilitating the appointment of his opponent in the race and Tinubu’s protege as House Majority leader.

“The chief cause of delay in enacting the budget is the persistent refusal or neglect of the Executive to present it in good time.

“As if the late or delayed submission of budget estimates wasn’t enough, in most cases, Ministers and heads of agencies contributed to the so-called delay by consistently refusing to appear before National Assembly Standing Committees to defend their budget proposals in line with the provision of the Law. At some point, the leadership of the National Assembly had to take up the issue with the President who advised his Ministers to honour legislative invitations to defend their budgets.

“What Nigerians don’t know is that the Executive, through the various Ministries, continued to propose additional projects to be included in the 2018 budget even as at April and May of 2018 which further delayed the passage of the 2018 budget. These were communicated officially and if anyone is in doubt, we will exhibit the letters with the dates they were written and received. In any case, the National Assembly inserted a clause in the Appropriation Bill consistent with S.318 of the Constitution which allowed the Budget to last for 12 months after Mr President’s Assent. This enabled the Executive to spend more of the capital component of the Budget as it still had 12 months protected by law.

“We advise Asiwaju Tinubu to be circumspect in his use of language. In this case, he spoke as a spokesperson of depravity. Our reaction must therefore be seen as a provoked counter-punch. Any one can descend into the gutter if he so wishes but no one has a monopoly of gutter language. We won’t run an adult day care centre anymore on matters like this.”

Nkeiruka Onyejeocha challenges Gbaja to step down speakership for her