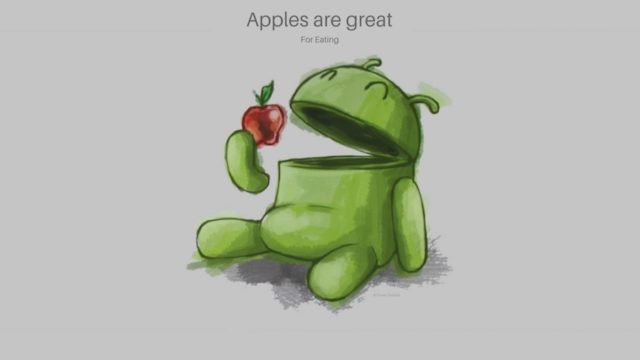 Remember when Apple launched their iPhone 8, iPhone 8 plus and iPhone X, and they thought they had arrived? they were now proud and carrying shoulders upandan. They now even set the price of the iPhone X at $1000 so that some of you cannot afford it.

With the release of all these hardware products, Google was no doubt feeling blessed. However, rather than obey Kendrick Lamar’s ‘Sit down, be Humble’, Google decided to rub it in the face of their competition, Apple.

Let’s take a look at some of the ways Google threw shades at their counterparts, Apple.

1. This Not So Subtle Jab

Google started off Pixel 2 unveiling with a promo video that funnily took a jab at Apple. In the video, Google asked: “What if a company based on questions questioned this?” With this question, a picture of a woman biting into an Apple was shown.

2. Extra features in iPhone Plus devices

It’s worth noting that Apple reserves better features for its Plus models of iPhone. In case you buy iPhone 7 Plus or iPhone 8 Plus, you get a dual camera which brings portrait mode. That’s not the case with Pixel; you get exactly the same features on different screen sizes.

At Pixel 2 event, a Google executive took a jab at Apple by saying: “We don’t set aside better features for the larger device.”

Google Pixel phones come with an advantage of unlimited Google Photos cloud storage. This means that you can continue taking as much as HD and 4K pictures and videos without worrying about the storage. That’s not the case with Apple’s iCloud.

“Pixel 2 users will continue to get free, unlimited storage for all videos and photos they capture in the highest resolution including 4K video and motion photos. Pixel users take twice as photos as iPhone users. If you use iCloud, you reach the free limit in less than 3 months,” Google said.

4. Move from iPhone to Pixel in 10 minutes

Moving to a new phone is hectic, and Google told that you can transfer your data from an old phone to new Pixel in less than 10 minutes. Google made fun of Apple, Subtly, and chose to display a picture of transferring data from an iPhone to a Pixel phone.

Seriously, Google has no chill.

It was further added that users can move their iMessages as well.

“We love picking the color names,” a Google executive said jokingly during the event.