These 21 Entertainers are set to 'blow' in 2021
Advertisement 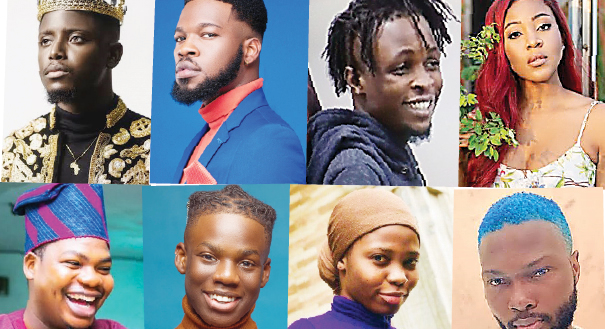 The year 2021 is just two-day-old but the New Year according to our findings, promises to be an interesting one in the entertainment industry. Going by their activities in 2020, all eyes are on certain entertainers to do even better this year. In no particular order, TopNaija takes a look at 21 of them…

Stanley Didia, aka Omah Lay, effortlessly ranks as one of the singers that are expected to make considerable impact in 2021. In the previous year, the ‘Bad Influence’ crooner released hit songs such as ‘Godly’, ‘Lolo’ and ‘Damn’. He was also nominated for the prestigious Headies Awards in the ‘Next Rated’ category.

He is reportedly signed to American record label, Atlantic Records, which is a subsidiary of Warner Music Group.

Sharon Ooja has proved that she is more than just a pretty face. The graduate of Mass Communication from Houdegbe North American University, Republic of Benin, got rave reviews for her interpretation of the lead role and title character of the movie, ‘Oloture’. She was also applauded for her sterling acting in ‘Coming from Insanity’.

Also in 2020, the actress, who rose on the wings of web series, ‘Skinny Girl in Transit’, featured in another web series, ‘The Men’s Club’.

Pundits have said that Ooja’s dedication, diligence and consistency would help her excel in 2021.

‘Dangbana Orisa’ singer, Bella Shmurda, was undoubtedly one of the biggest revelations of 2020. His hit song, ‘Cash App’, which featured Zlatan Ibile and Lincoln, was a street anthem in 2020 and its buzz still has not died down.

A pointer that the young singer has caught the ears of those who matter in the music industry is the fact that Davido and Olamide enlisted him on their respective albums. Without mincing words, 2021 does look good for him.

Call him one of the future ‘kings’ of Nollywood and you would not be wrong. Ever since Jidekene Achufusi, aka Swanky JKA, acted as Nnamdi Okeke in the award-winning movie, ‘Living in Bondage: Breaking Free’, he has continued to enjoy the attention of fans and critics. He also got positive reviews for his roles in the romantic comedy, ‘Kambili: The Whole 30 Yards’; and campus drama series, ‘Crazy, Lovely, Cool’.

In recognition of his talent, Achufusi won the Trailblazer Award at the Africa Magic Viewers Choice Awards 2020, as well as the Future Awards Africa Prize for Acting.

Barring any unforeseen circumstances, the actor is expected to consolidate his growth in the industry in 2021.

Singer, Temilade Openiyi, aka Tems, practically caught many by surprise with her rise in the music industry. Perhaps because of her sound and style of music, a lot of people did not even know she was a Nigerian.

What is not in doubt, however, is that she holds a lot of promise. The video of her song, ‘Damages’, which was released in September 2020, had over two million views as of the time of filing this report, and that is pretty impressive for a relatively new artiste.

She went on release her Extended Play album, ‘For Broken Ears’ to favourable reviews. She was also nominated in the ‘Next Rated’ category of the Headies.

Those who underestimate multi-talented actress, singer and songwriter, Bukunmi Oluwasina, do so at their own peril. The petite entertainer has shown that she has several layers of talent.

In 2020, Oluwasina was commended for her role in Kunle Afolayan’s ‘Citation’. The actress, who got married to her longtime lover in 2020, has also featured Johnny Drille and Fireboy in her songs. She is definitely one to watch out for in 2021.

Though Gabriel Afolayan is by no means a greenhorn in Nollywood, he however outdid himself in 2020.

He was nominated in the ‘Best Actor in a Drama (Movie/TV series)’ category of the Africa Magic Viewers’ Choice Awards 2020 for his portrayal of ‘Kossi’ in the movie, ‘Coming from Insanity’.

Many also would not forget in a hurry how he skillfully interpreted his role in his elder brother, Kunle Afolayan’s movie, ‘Citation’.

Beyond acting, Afolayan is also a talented singer. He is indeed one to keep one’s eyes on in 2021.

Apart from winning Big Brother Naija in 2020, Olamilekan Agbeleshe’s music career also got a boost in 2020 and his fan base grew immensely. While he was still trying to ‘find himself’ in the competition, his song ‘Awa Fierce’ which he had earlier released was enjoying massive downloads and airplays.

Agbeleshe, aka Laycon, also made history as the BBN winner with the highest number of votes since the inception of the show. Upon leaving the house, he was featured in the remix of DJ Neptune’s hit song, ‘Nobody’, alongside Joeboy. He also released the video for his song, ‘Hip Hop’ which had been released before BBN.

With his fan base still growing, Laycon is evidently one to keep tabs on in 2021.

Though Erica Nlewedim was disqualified from Big Brother Naija 2020 after an altercation with fellow housemate, Laycon, the actress seems to have recovered from the setback and is even soaring higher.

With a string of endorsement deals and social media influencing gigs, the actress is evidently on the path to stamping her feet in the entertainment industry. With the buzz she has been getting, it goes without saying that 2021 would be a great year for her if she does not relent.

Chike Osebuka, simply known as Chike’s debut album, ‘Boo of the Booless’ blew many away and some wondered where he ‘suddenly’ came from.

For those who don’t know, the singer has actually been around for some time. He was a contestant on both MTN Project Fame West Africa (2015); and The Voice Nigeria Season 1 (2016) where he emerged as the first runner-up.

His soft vocal range and brilliant songwriting are some of the sterling qualities that have stood out the budding singer.

To crown a great year for his career, Chike was nominated in four categories of The Headies 2021― ‘Best RnB/Pop Album’, ‘Best Vocal Performance (Male)’, ‘Album of the Year’, and ‘Hip Hop World Revelation of the Year’.

Edo State-born Divine Ikubor, aka Rema, started making waves in 2019 and he continued that streak in 2020. He won the ‘Next Rated’ category of the Headies in 2019 and he got wide acclaim in 2020, including appearing on a former President of the United States of America, Barack Obama’s playlists.

To cap the year, his song, ‘Beamer’ was featured as part of video game, FIFA 21’s soundtrack.

Years after following the footsteps of his elder sister, Dakore, and joining the movie industry, Timini Egbuson, is evidently coming into his own. He starred in a couple of noteworthy movies in 2020, including Funke Akindele’s ‘Omo Ghetto: The Saga’.

The actor’s performance in the movie, ‘Elevator Baby’, also clinched him the AMVCA award for ‘Best Actor in a Drama (Movie or TV Series).

The name, Debo Adebayo, might not ring a bell to many. But the mention of ‘Mr Macaroni’ would certainly elicit smiles from many. The social media comedian and actor’s career grew in leaps and bounds in 2020. His skits were viewed by many on social media, just as his followership increased.

In the latter part of the year, Adebayo also showed his activism side when he participated actively in the #EndSARS protests, and that endeared him to many.

He won the ‘Content Creation’ category of The Future Awards Africa 2020. The entertainer will also appear in the soon-to-be-released biopic of late Apala musician, Ayinla Omowura, produced by the legendary Tunde Kelani.

Svelte and versatile, Omowunmi Dada is one role interpreter who ‘becomes’ whatever character she is cast to act. In 2020, the Creative Arts graduate of the University of Lagos featured in one of the most talked about Netflix movies of the year, ‘Oloture’; a web series, ‘Game on’; and another fan favourite, ‘Finding Hubby’, among others.

To wrap up 2020, she was recently on the location for a new biopic on the life and times of Apala musician, Ayinla Yusuf, popularly known as Ayinla Omowura. From all indications, it does not seem like she is ready to ‘slow her roll’ in 2021.

Beautiful and vivacious actress, Bimbo Ademoye, has continued to wow her fans with her impressive acting skills.

In 2020, she featured in movies such as ‘Dear Affy’, remake of ‘Nneka the Pretty Serpent’, and ‘Introducing the Kujus’.

She is a role interpreter you should pay attention to in 2021.

Budding singer, Ikuforiji Olaitan, aka Oxlade, gained more visibility and an increased fan base in 2020. His hit song, ‘Away’, made Rolling Stone magazine’s ‘50 Best Songs of 2020′ list. He was also nominated in the coveted ‘Next Rated’ category of the Headies Awards.

Actor, Lateef Adedimeji’s story is a proof that dreams come true when one stays committed to them. The talented role interpreter has continued to win fans for his characterisation of diverse roles. He delivered wonderful performances in movies such as ‘The New Patriots’ and ‘Veil’. He also acted a one-man stage drama in the early part of 2020.

Many are looking forward to his portrayal of late Apala musician, Ayinla Omowura, in a biopic produced by Tunde Kelani. With his consistency and hard work, the sky is the limit for Adedimeji, who once stated that he learnt acting from his cat.

With her hilarious and engaging skits, Apaokagi Maryam, popularly known as Taaooma, has become a highly sought after social media comedian. In 2020, she worked with quite a number of brands and her clientele seems to be expanding.

Though she got engaged to her boyfriend, Abdulaziz Oladimeji, aka Abula, in 2020 and might be getting married this year, it does not seem like that would take the shine off her career.

Singer, Olorunyomi Timothy, popularly known as Bad Boy Timz, has swiftly moved from being a relatively unknown singer to a rising artiste that is enjoying the attention of fans and critics alike. Even popular rapper, Olamide, believes in Timz’ talent as he featured him on ‘Loading’, a song off his latest album, ‘Carpe Diem’. As of the time of filing this report, the music video already had 3.4m views on YouTube.

Sadiq Onifade, better known as Wurld, is another artiste worthy of mention. His music videos have impressive views on YouTube. Onifade’s recent association with popular songstress, Asa, alludes to the fact that his talent is fast earning him recognition in places that matter.

Social media comedian, actor and singer, Samuel Perry’s antecedents have shown that he is one entertainer who cannot be confined to a box.

Just as his social media skits are enjoying millions of views, he has also appeared in a number of notable movies such as Toyin Abraham’s ‘Alakada Reloaded’ and Funke Akindele’s ‘Omo Ghetto: The Saga’.

He released his Extended Play album, ‘Fine Boy Agbero’ in 2020.With the passion he has shown for his craft, Broda Shaggi will continue to be in the faces and ears of Nigerians in 2021.

Related Topics:Top Nigerian entertainers
Up Next