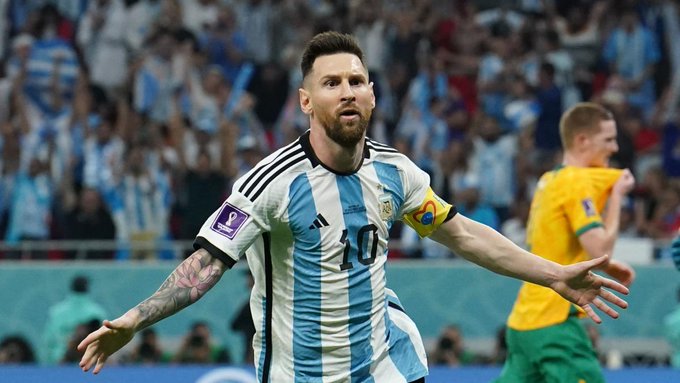 Watching Lionel Messi play at the world cup feels so wrong, because for some reason, there comes this idea that the man isn’t shown enough appreciation for all he has done in the game, but then again, no amount of accolades thrown at him is enough to speak of his talent.

In a 1000 match appearance, the great man has equaled the stats of 1,127 goal contributions worth 789 goals and 338, and for his 1000th game that came putting on the colors of Argentina, his performance on the night were no different from his performance in his very first game.

In a brilliant performance that helped Argentina defeat Australia and advance to the World Cup quarterfinals, Lionel Messi was at the top of his game.

For former Manchester United defender Rio Ferdinand: “Messi has put on the best individual performance we have seen at this World Cup by a mile.

“The crowd, it was almost godlike after anything he had done. We were almost watching the reaction from the fans to everything he did.”

And of course, ex-England striker Alan Shearer had words to say about the Argentine:

“[We are] so lucky to be in the stadium to watch him. What a second-half performance from him.”

Everything good about Argentina came from Messi, the star of Paris Saint-Germain, who put on one of the greatest individual performances in World Cup history. Messi was crucial from beginning to end.

In the 35th minute, the seven-time Ballon d’Or winner started the scoring with a skillfully executed strike that curled into the bottom corner.

As they sought to increase their lead in the second half, Messi continued to propel his team forward and set up scoring opportunities for his teammates.

However, Matthew Ryan needs talking about considering how his performance in goal for Australia was worth Argentina giving him a man of the match award for particularly for his part in gifting the South American team a chance to extend their lead.

Without the goal, Argentina may not have had the game all too easy.

In the 57th minute, Julian Alvarez doubled the lead thanks to a mistake by Australia’s Matthew Ryan in net.

Enzo Fernandez’s own goal in the 77th minute gave the Socceroos a chance to tie the match, but Argentina held on to secure a crucial victory.

Despite a few good individual performances, Messi was still the best player on the field.

The game’s most exciting moment was without a doubt Messi’s goal. Messi was masterfully discovered by Rodrigo De Paul following some complicated play with Alexis Mac Allister.

The ball was then curled into the goal by Messi, who made it appear so effortless even though it was anything but.

Qatar 2022 Is My Best Tournament So far—Lionel Messi