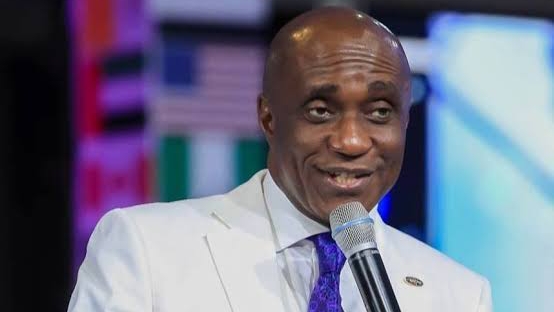 Pastor David Ibiyeomie, founder of Salvation Ministries has spoken, saying he has the idea that can get Nigeria out of its current economic situation.

Dependent on his wisdom, the Evangelist while admonishing his congregation, attested his idea is what Nigerians need to bust out of its economic buhaha.

He stated this while preaching in a sermon titled ‘Divine Wisdom Our Heritage.’

However, Ibiyeomie stated that he could only share the wisdom with one person, the individual that would become Nigeria’s president come 2023.

According to him, the person must sign an agreement that will state that the wisdom came from him(clergy).

He was quoted by Church Gist as saying, “Now, I stood here before service started and strange wisdom came to me, which I will never share again, I will only share it to whoever comes to power in Nigeria

I will sit with the person and I will tell the person I am giving you this idea, tell the world that I gave you, if you don’t write it, I won’t give you.

“I can tell you, the wisdom I have today will bring Nigeria out of its economic woes. But I will never share it again.

“I have strange wisdom that will make Nigeria out of economic woes, but whoever becomes the president is who I will give it to and I will tell the person to sign that this idea came from me. So, that you will not go on television and say it’s your own. I will not insult the person but the person must sign.

“I will give the person the idea and tell him to sign my papers that I gave you this idea, free of charge because I love Nigeria.

He further stated that it is not the Devil that is responsible for the nation’s crisis, but it’s because of lack of wisdom

Related Topics:2023 ElectionPastor Ibiyeomie
Up Next