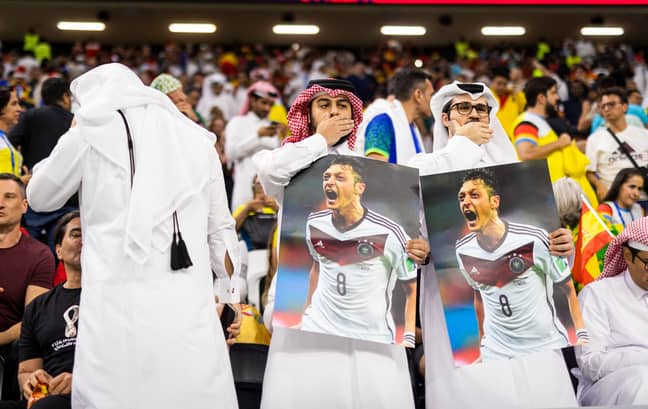 Germany is given a taste of its own medicine by Arabs who send across a message of Mesut Ozil mistreatment in response to the Germany national team’s antics against Japan.

Football is a crazy affair, and if you haven’t figured that out yet, then it sure would be surprising to find out how political it has become in recent years judging by Europe turning on field games into advertising and propaganda platform.

In response, fans dressed in Arab attire during Germany’s match against Spain were seen passing across a political message of theirs regarding former Germany national team player, Mesut Ozil.

Several supporters were seen covering their lips while holding up posters of Mesut Ozil during Sunday’s World Cup match between Germany and Spain inside the Al Bayt Stadium.

In a protest against FIFA’s decision to outlaw the OneLove armband, every starter for Germany in their Group E match against Japan last week chose to cover their mouths while posing for a team photo.

Following the fear of athletic sanctions, Germany, England, the Netherlands, and other European countries withdrew their plans to wear the armband in support of the LGBTQ+ community.

In response to the ban, the German FA will take FIFA before the Court of Arbitration for Sport.

In response to Germany’s gesture before their opening match on Sunday evening, supporters inside the Al Bayt Stadium held up pictures of Mesut Ozil while covering their mouths.

By emphasizing Ozil’s remarks on his treatment, those supporters intended to draw attention to what they viewed as unfair treatment from the demonstration.

Ozil made the decision to leave the international football scene four years ago.

The former Real Madrid and Arsenal midfielder attributed the choice to unjust treatment stemming from his encounter with Recep Tayyip Erdogan, the Turkish president.

A photo of Ozil with Erdogan, whose political career has been marked by very contentious policies, ignited debate across the country.

Due to what he called “racism and disrespect,” Ozil announced on his Twitter account that he would not play for the German national team again.

“For me, having a picture with President Erdoğan wasn’t about politics or elections, it was about me respecting the highest office of my family’s country.

“My job is a football player and not a politician, and our meeting was not an endorsement of any policies. The treatment I have received from the DFB and many others makes me no longer want to wear the German national team shirt.

“I feel unwanted and think what I have achieved since my international debut in 2009 has been forgotten.”

In the article, Ozil, who played 92 times for Germany over a nine-year span, criticized former DFB president Reinhard Grindel.

“People with racially discriminative backgrounds should not be allowed to work in the largest football federation in the world that has players from dual‑heritage families,” he wrote.

“Attitudes like theirs simply do not reflect the players they supposedly represent. In the eyes of Grindel and his supporters, I am German when we win but I am an immigrant when we lose.”

“It is with a heavy heart and after much consideration that because of recent events I will no longer be playing for Germany at international level whilst I have this feeling of racism and disrespect.

“I used to wear the German shirt with such pride and excitement, but now I don’t. I feel unwanted and think that what I have achieved since my international debut in 2009 has been forgotten.”

The German national team responded to their decision to cover their mouths in protest of the armband ban on Wednesday afternoon.

“It wasn’t about making a political statement – human rights are non-negotiable. That should be taken for granted, but it still isn’t the case. That’s why this message is so important to us.

“Denying us the armband is the same as denying us a voice. We stand by our position.

“We wanted to use our captain’s armband to take a stand for values that we hold in the Germany national team: diversity and mutual respect. Together with other nations, we wanted our voice to be heard.”

Following such, the Qatari fans did have the perfect message for Germany in what they felt was a kettle calling pot black moment regarding presumed racist actions towards Mezut Ozil, a Germany international.

Germany Given World Cup Lifeline Thanks To an Accidental Hero