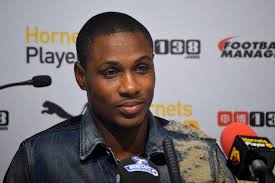 Not all heroes wear capes. Some of them play football and give back to the society.

Odion Ighalo is one of such heroes.

The Super Eagles and Changchun Yatai forward is set to launch an orphanage home  called the Ighalo Orphanage Home at Ijegun, Ikotun, Lagos.

He broke the news on his Twitter page, and shared photos of the completed home. He also announced it will be launched on the 16th of December.

He also held a press conference on Tuesday to announce the launch, with former Super Eagles star and coach Samson Siasia, Peter Rufai, and Austin Eguavoen in attendance, along with ex-Super Falcons goalkeeper Ann Chiejine.

See photos of the orphanage home and guests at the press conference below:

Odion Ighalo’s sense of love and magnanimity is something we should all aspire to in whatever little way we can.

Algernon Charles Swinburne once said, “A man with no sense of love or reverence or devotion due to something outside and above his poor daily life, with its pains and pleasures, profits and losses, is as evil a case as a man can be.”

Don’t be an evil somebody, give back to society.

8 Motivational Sentences That can Change Your Life