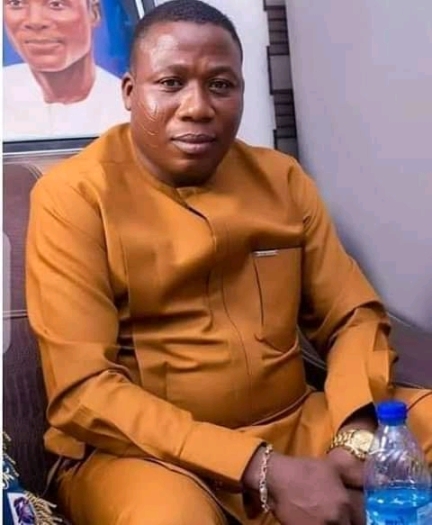 His Benin Republic-based counsel, Ibrahim Salami, disclosed this in an interview on Tuesday. He explained that Igboho is still nursing some of the injuries.

In accordance with him, the Yoruba Nation agitator needs to be granted bail to treat himself.

During the raid, the DSS apprehended 13 of his comrades, who are presently undergoing trial, murdered two and disclosed that Igboho escaped.

Salami said, “I urge his family and supporters to be patient and prayerful. They should support him with prayers. When they attacked his house in Nigeria, he jumped from the top of a building. His ribs were hurt. He was severely injured.

“In fact, he could not stand before the judge. He sat to address the judge. He needs freedom for medical attention. Those of us that are his lawyers are making a stringent effort.”

DSS spokesperson, Peter Afunanya, had at a press conference in Abuja, declared that the secret police carried out the raid after intelligence reports uncovered that Sunday Igboho amassed weapons in his home.

The DSS, thus, launched a manhunt for the activist.

Afunanya stated, “In the early hours (about 0134 hours) of today, 1st July, 2021, a joint team of security operatives raided the residence of Sunday Adeniyi Adeyemo a.k.a. Sunday Igboho at Soka, Ibadan, Oyo State.

“This was based on intelligence that he had stockpiled arms in the place. On approach to the residence, the team came under heavy gun attack by nine (9) men, suspected to be IGBOHO’s guards. Six (6) of them were armed with AK-47 gun and Three (3) others, with Pump-Action riffles.

“In the course of the exchange, two of Igboho’s armed men were gunned down while the rest were subdued and arrested. Only one operative who was shot by the assailants on his right hand sustained injury. He has however received medical attention and is very stable.

“Consequently, Igboho is advised to turn himself in to the nearest security agency. Those cheering and eulogising him may appeal to or advise him to do the needful.

“He should surrender himself to the appropriate authorities. He or anyone can never be above the law. Meanwhile, those arrested will be charged accordingly.”

Related Topics:DSSfeatureSunday Igboho
Up Next