#EndSARSMemorial: How 34 hoodlums were arrested

Elon Musk on course to emerge first trillionaire on earth 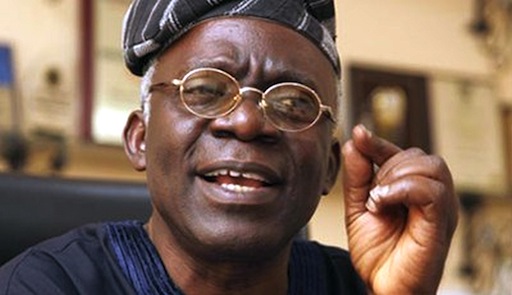 This is even as he dismissed as of no effect, the court judgement which backed the non-recognition of Mr. Ibrahim Magu as acting Chairman of EfCC.

Falana, who spoke to journalists on the State of the nation at the Benin airport, alleged that Obasanjo instituted the culture of impunity under the democratic dispensation in Nigeria when he served as President of the country.

He said the former President had the opportunity to have made the country great by providing good leadership, noting that if he had rid the country of corruption, the country would have been greater by now.

“If President Obasanjo, who ruled this country for eleven and half years had institutionalized democracy, rule of law, respect for human rights, we will not be in this mess and the control of Nigeria by the Nigerian people, we will be having an Eldorado by now.

“So, please, let Obasanjo and others be honest to admit that they brought us to this shameful episode. So, nobody should grandstand when it comes to the mis-governance of Nigerians. Nobody has apologized.

“The fact that between 1999 and 2007, this country, made close to $100 billion from the sale of one commodity; oil. What is there to show for it rather than permanent darkness. The more you spend on energy, the more darkness you get. What is there to celebrate? Mass unemployment, sales of the assets of the country to a few boys who were closed to the presidency, rigging of elections.

“You have all forgotten that the results from Delta, Ondo and others were announced in Abuja and in those States in order to rig those elections. What is there to celebrate President Obasanjo is entitled to form his own political party or his own movement but he should please desist from insulting the collective intelligence and the collective memories of Nigerians.

“When Sharia started, the federal government did not challenge the unconstitutionality. Under that era, we had ethnic and religious​ violence that claimed over 20,000 lives of Nigerians. So, there is no members of the Nigeria’s ruling class that can really grandstand,” he said.

The Senior Advocate of Nigeria said apart from the allegations of nepotism and clannishness leveled against President Muhammadu Buhari by Obasanjo, both are as guilty as charged.

“With great respect to former President Olusegun Obasanjo, apart from the allegations of nepotism and clannishness, which cannot be disputed, every other allegations made there, is nothing to write home about. In another words, all the other allegations took place under President Obasanjo and in fact, he institutionalized the culture of impunity under the democratic dispensation in Nigeria.

“But I do not want to join issues with Obasanjo for now on his letter, so that one is not seeing as endorsing impunity in our country. Other than the allegations of nepotism and clannishness which the presidency is notoriously noted for, I think, they are birds of same feathers,” Falana posited.

Commenting on the Senate case, Mr. Falana said the court never made any pronouncement on the appointment of Mr.Ibrahim Magu as the acting Chairman of the EFCC, adding that to that effect, adding there was nothing for the Senate to celebrate.

“It is not a judgement to celebrate with great respect. I have read the judgement of the case filed by a private lawyer based in Abuja, Mr. Tolu Ajaomo, against the Attorney-General of the Federation and the Senate.

“Mind you, EFCC is not a party, Mr. Ibrahim Magu was not a party, so no court in Nigeria can make order against a person who was not joined in any suit. But having read the ruling, with great respect, the case was struck out. If a case was struck out, you cannot rely on it. The court held that the lawyer has no locus standi to have filed the action and therefore struck it out.

“However, in an academic exercise, the court said, having regard to Section 2, 3 of the EFCC Act, the Senate has the power to confirm or reject the nomination of the President. The court never ever made any pronouncement on the appointment of Mr.Ibrahim Magu as the acting Chairman of the EFCC. No statement was made to that effect. So, there is nothing to celebrate in the judgement. I was therefore flabbergasted this morning when I read that the Senate was asking the President to bring a fresh nomination.