Richard Mofe-Damijo is a dapper grandfather at 59

Hushpuppi reportedly behind 2018 £2m scam of Italian Serie A team 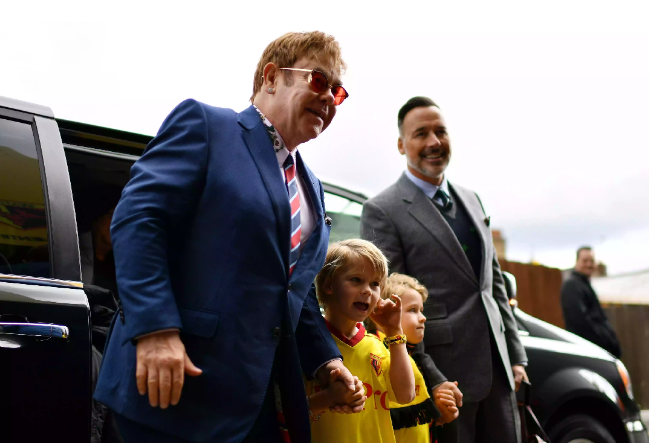 Singer Elton John will let his sons will lead his beloved team, Watford out for the FA Cup final against Manchester City in the Wembley Stadium.

Zachary, who is a promising young player in Watford’s Hornets’ academy, and his brother Elijah will walk out with the players at Wembley.

Elton John, who is also Watford ’s president, can’t make the final because he is playing a gig in Copenhagen.

Instead he has wangled it so that Zachary, eight, and Elijah, six, can lead them out for Saturday’s showpiece event.

Elton was owner and chairman of Watford when they last reached the FA Cup final against Everton under Graham Taylor in 1984.

He was in tears when he watched them walk out of the tunnel ahead of their 2-0 defeat against Howard Kendall’s side at the old stadium.

Although he cannot be there himself for their FA Cup final return 35 years later, it will be a proud moment for him and his husband when his kids walk out on to the hallowed turf.

Elton’s Farewell Yellow Brick Road tour hits Denmark on the same evening as his beloved team’s bid for glory with his wonderful children leading the way.

And when the Hornets booked their place in the final, stars like keeper Ben Foster teased him about his upcoming absence.

Foster said at the time: “It’s no dilemma. He should cancel right now.

“I have loads of people I know who have weddings for that day and stuff.

It is their own fault, d*ckheads, don’t book a wedding in the summer for Cup final day!

“I don’t think you could have predicted this at the beginning of the season. But as the season wore on it became obvious we had the chance of doing something.

“So Elton, it seems you just need to cancel, sorry guys.”