Why petrol price may increase soon 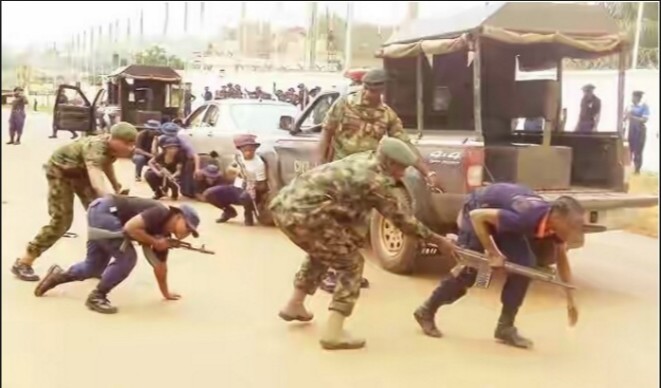 On Thursday, there was crisis and pandemonium at Udensi Roundabout, few poles to Ebonyi State Government House, Abakaliki, when policemen and armed soldiers clashed over alleged violation of traffic rule by the latter.

The fracas started when some police traffic wardens impounded a tricycle, whose operator violated traffic light signals. An eyewitness, who would not want to be mentioned in print, explained that when efforts to secure the tricycle failed, the operator contacted the owner who was a soldier.

He narrated that some minutes later, the soldier arrived with another tricycle and asked after the traffic police wardens who impounded his tricycle.

This resulted in a fierce fight as the wardens allegedly engaged the soldiers, prompting a detachment of soldiers on guard at the International Conference Centre, Abakaliki, to rush to the scene and joined the fray.

While the matter was being settled inside ICC, a detachment of mobile policemen and operatives of anti-robbery squad arrived the scene and charged at the soldiers.

The soldiers, however, responded by cocking their rifles, while also making calls for reinforcement from their base.

It took the intervention of senior police officers from the Ebonyi State Police Headquarters, Abakaliki, to calm the situation and avoid what would have been a major security scare and bloodshed as reinforcement from an army base arrived the scene minutes later.

When contacted, the Public Relations Officer of the Command, Mrs Loveth Odah, said it was an internal matter that should have been settled by the appropriate authorities.

How Jeep crushed Okada rider to death in Lagos