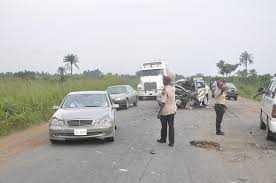 Six people survived an accident involving collision between a truck carrying a 40-foot container and a Toyota Camry on the Ikorodu-Sagamu Road in Ogun State.

It was reported that the accident occurred when the truck driver carrying a 40-foot container suddenly lost control of the vehicle and rammed into a Toyota Camry ,luckily no live was lost.

The survivors were said to have run out after seeing that the container on the truck was about to fall off due to the impact of the collision.

A resident, Sanni Yusuf, in a post on Instagram, said the accident was caused by the slow-pace construction work on the Ikorodu Road, adding that many commuters had been killed on the road.

He wrote, “The three passengers on board were said to have run out of the car before the container landed. The road is indescribably worse. It’s a death trap.

“Construction is slow-paced. Engineers would work for a short while and go on a break for a long while. Many lives have been lost on this road. Each time I set out to go to work, my heart beats.”

On a Facebook group, Ikorodu Ambassadors, some users confirmed seeing the crash.

One Omolayo Phatyromah said, “It’s not that truck alone o.. we have like three accidents on that road in just two days; two on Monday and one on Tuesday.”

He said, “It was recorded by the Mosimi Unit Command. Nobody was killed from the six people involved in the accident. Only one person got injured and was taken to the Micvol Hospital for treatment. The accident happened on Monday opposite the NNPC depot in Mosimi along Sagamu Road. It was caused by the bad road.”

Ikorodu is a large city in Lagos State, Nigeria. It is located to the north-east of Lagos City, along the Lagos Lagoon and shares a boundary with Ogun State.

Related Topics:TRUCK-CAR COLLISION
Up Next

Nigeria is in trouble- Bauchi governor says over national insecurity