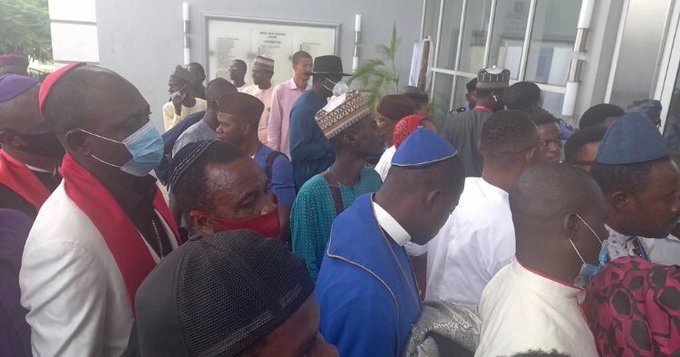 The Tinubu Campaign Organisation, TCO has debunked proven claims that fake bishops were hired to attend the unveiling of Kashim Shettima as the running mate of APC’s Bola Ahmed Tinubu.

Speaking in an interview, the Director of Media and Communication of TCO, Bayo Onanuga, on Wednesday, July 20, disclosed that the supposed bishops that attended the event are not fake, as claimed by some media houses.

With photos and videos of the bishops spreading over social media, many thought it was an attempt by the camp to make Nigerians believe that Tinubu had the backing of the Christian Association of Nigeria, CAN. However, the Christian association came out to deny such a claim as non of its real members were present at the event

However, Onanuga, during the interview, disclosed that the clerics at the event were not big names in the Christian faith.

According to him, the bishops are church leaders who genuinely believe that Nigerians must let go of politics of hatred and religious bigotry and rather embrace politics of peace and nation-building.

Onanuga stated that the clerics are patriotic Nigerians who believe in the country’s unity, asking Nigerians to ignore the claims made by the purveyors of hatred.

He said, “We want to say that those clergymen were not fake, not mechanics or yam sellers as the purveyors of hatred have made Nigerians to believe in the social media. They are not big names in Christendom yet, they are gradually building up their missions.

“They are church leaders who genuinely believe that Nigerians must eschew politics of hatred and religious bigotry and rather embrace politics of peace and nation building.

“We, therefore, deplore the hysterical twisting of the presence of these men and women in cassocks and the false accusation against our candidates, Asiwaju Bola Ahmed Tinubu and Senator Shettima”.