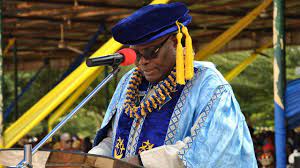 This dissolution came up a few hours after his statement that power should rotate to either Ukwa axis of Abia South or Abia North.

Earlier in the day, Wabara, who is also the Secretary, Board of Trustees of the Peoples Democratic Party, had warned the state government and the party that they will lose Abia if another Ngwa man tries to succeed Ikpeazu

Wabara had warned that any attempt to make another Ngwa man succeed Ikpeazu who is also an Ngwa man would be counterproductive for PDP, while the party might get a protest vote in Abia, come 2023.

Adolphus Ndaneweh Wabara is a former Nigerian senator who represented the People’s Democratic Party (PDP) in Abia State. He became a senator in 1999, and was president of the Senate of Nigeria from 2003 to 2005, he continued his tenure as a senator until 2007 when he stepped down.