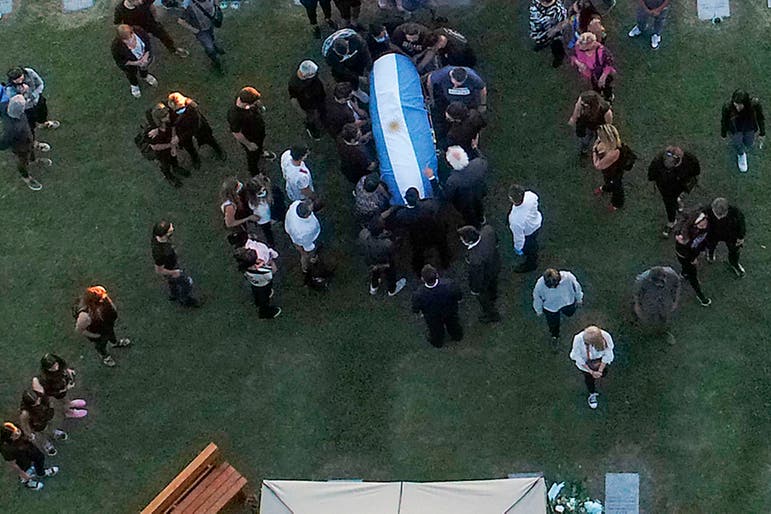 Argentina’s Diego Maradona, one of the world’s greatest ever soccer players, was buried on Thursday amid a global outpouring of grief from the streets of Buenos Aires to Naples in Italy.

The death of Maradona at the age of 60 on Wednesday, following a heart attack, has sparked both mourning and celebrations of a true sporting star, who was a genius on the soccer field but lived a life marred by struggles with addiction.

In a day of high emotion, the World Cup winner was taken by hearse late on Thursday to the Bella Vista cemetery on the outskirts of Buenos Aires – where his parents are also interred – for a small private ceremony of his family and close friends.

More tributes have continued to pour in from Nigerian stars to Argentina legend Diego Maradona who passed away at the age of 60 on Wednesday after he suffered “acute heart failure.”

Huge crowds of fans on Thursday gathered at Argentina’s presidential palace, as they paid their final respects to the football legend while the city of Naples is also mourning the demise of their football hero.

Former Super Eagles captain, Austin Okocha, who played against the Argentine at the 1994 World Cup in USA led the tributes to the former Barcelona star.

“What a sad day, we have lost one of the greatest to ever have played the game of football, but God knows better than man, RIP king, you will be missed,” the former Paris Saint-Germain midfielder wrote on Instagram.

The former Argentina attacking midfielder and manager died at his home in Tigre, near Buenos Aires. Three days of national mourning have begun for the Argentine hero.

Thousands of Argentines lined the roads as the procession passed on the hour-long journey from the presidential palace in central Buenos Aires, where Maradona had lain in state during the day.

Earlier, there were clashes between police and fans and a febrile atmosphere more akin to a rowdy soccer game than a wake, with fans clambering up the palace gates to get as close as possible to their hero. In Italy, crowds tied hundreds of blue and white scarfs to the railings outside his former club Napoli, while in France, sports paper L’Equipe’s front page blared out: “God is dead”.

In Argentina, three days of national mourning were called for the player who led the country to a 1986 World Cup win and is revered with cult-like status.Tens of thousands took to the streets, not all wearing masks, despite fears over the COVID-19 pandemic.

Some left flowers and messages at his childhood home.

“Maradona for me is the greatest thing that happened to me in life. I love him as much as my father and it’s like my old man died,” Cristian Montelli, 22, a supporter of the star’s former club Boca Juniors said with tears in his eyes after he had filed past the coffin.

“If I die young, hopefully upstairs I can play ball and watch a Boca game with him,” added Montelli, who had a tattoo of Maradona’s face on his leg. During the day, Maradona’s body lay in state in a closed casket at the Casa Rosada presidential palace on the central Plaza de Mayo.

It was covered with the blue and white national flag and an Argentina soccer jersey with the number 10 that had been part of his nickname “D10S” – a play on “dios”, the Spanish word for God.