See Full List Of Winners At The 7th AMVCA
Advertisement 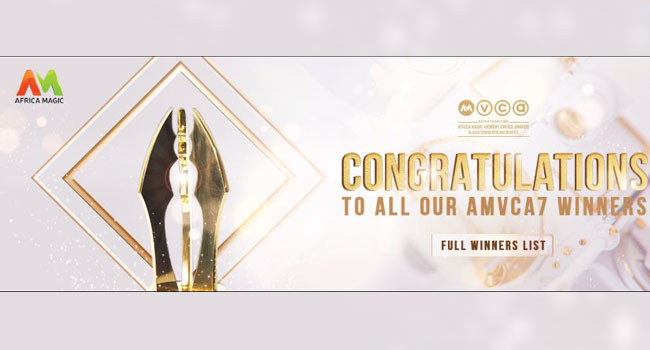 The widely popular and publicized seventh edition of the Africa Magic Viewers’ Choice Awards (AMVCA) has held in glamorous fashion.

It was indeed a night of glitz with so many celebrities in attendance, all looking highly ravishing in their different attires, coming together to celebrate great achievers and achievements in the movie industry within the year under review.

The night was an emotionally-charged one full of entertainment, glamour and red carpet extravaganza as Africa’s biggest film and television stars gathered at the Eko Hotels and Suites in Lagos for the seventh edition of the Africa Magic Viewers’ Choice Awards (AMVCAs).

Hosted by the duo of IK Osakioduwa and AMVCA newbie Amina Abdi Rabar, the event held on Saturday, March 14, and is organized by Africa Magic in association with MultiChoice. The 7th edition of the AMVCAs was also sponsored by Amstel Malta.

The biggest snub of the night was 2018 blockbuster, Kemi Adetiba‘s ‘King of Boys’ with its 6 nominations and zero win.

Most of the online reaction to KOB’s massive AMVCA snub rested heavily on the AMVCA’s 2019 silence that left the high grossing political drama with an unequal fighting chance against some 2019 nominees. The conversations mostly sidelined the fact that the movie got nominated in predominately voting categories thereby placing its chances of winning on the nominee with a gusto for getting muddy and canvassing votes.

Another film released in 2018 and nominated for this year’s award was critically acclaimed psychological thriller ‘Sylvia’ directed by Daniel Oriahi. Its lead actress, Zainab Balogun got nominated in the Best Actress category that turned out to be Toyin Abraham‘s sole win of the night.

Abraham’s singular win was also one of the shocking highlights of the award night. The actress has had a remarkable 2018 and 2019 and was nominated in both Best Actress category and twice in Best Actress in a Comedy category. Surprisingly, Abraham lost her comedy category for ‘Bling Lagosians’ and ‘Kasanova’ to Funke Akindele for her performance in ‘Moms at War’.

Finally, Nollywood’s current rave, ‘Ratnik’ made one of the night’s second biggest winners with 2 wins from its 7 nominations. The Sci-fi won in both the Best Art Director and Best Costume categories.

Best Supporting Actor in a Movie or TV Series

Best Supporting Actress in a Movie or TV Series

Tina Mba – The Set Up

The Set Up – Mohammed Attah

Best Lighting Designer in a Movie or TV Series

Best Actor in a Comedy (Movie or TV Series)

Kate Henshaw – The Ghost And The House Of Truth

Best Writer in a Movie or TV Series

Against All Odds: A Tale Of Resilience – Aderemi Davies

Life As It Is – Uche Odoh

The Gift – Mercy Aghedo – The Gift

The Set Up – Niyi Akinmolayan

The Ghost And The House Of Truth – Akin Omotosho