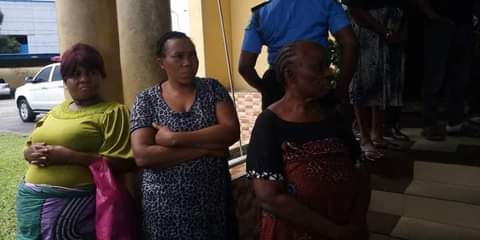 Rivers police have arrested a woman who allegedly sold her newborn grandson for N1.3M because son-in-law didn’t pay the bride price before impregnating her daughter

The Rivers State Police Command has arrested a woman, Antonia Amos, who allegedly sold her grandson at birth at the sum of one million, three hundred thousand naira (N1.3M) and rescued the baby.

The Commissioner of Police (CP) Joseph Mukan disclosed this on Thursday, October 8, while releasing the now two-week-old baby to her parents at the State Command’s Headquarters in Port Harcourt where the three suspects were also paraded.

Mukan stated that detectives of the Trans-Amadi Police Station began an investigation into the case of Child Trafficking, reported 25 September 2020 by one Christian Duru, father of the baby.

He said Duru’s wife, Anthonia Joseph, gave birth to the baby and his mother-in-law sold baby at the cost of one million, three hundred thousand naira (N 1.3M)

“The baby boy has been released to the mother while the suspects are in our custody helping in the investigation and efforts intensified to arrest the remnants of the syndicate.” he added.

The child ’s mother, Anthonia Joseph explained that her mother (the baby’s grandmother) insisted on selling her son to a buyer in Imo State on the grounds that her husband had yet to fulfil his marital obligations.

Joseph disclosed that her mother took her to Imo State where she was delivered of the baby, adding that she connived with the midwives and nurses to sell the baby and threatened her not to tell anyone.

“I asked her why ? She said my husband had yet to pay the marital obligations, that if I don ’t accept it she was going to strangle me and the baby. The buyer came by 5 am, they took the baby and she (the alleged buyer) collected the baby and crossed to the other side of the road. I asked my mother why she did that ; she said if if exposed her that she was going to kill me,” she stated.

On how the baby was rescued, Anthonia’s husband Christian Duru, said the grandmother had lied to him on the telephone that his son was dead but that he suspected foul play when his wife did not speak in the presence of her mother.

“She was crying that she cannot say anything that she will call me later. Later my wife called me saying that her mother sold our baby boy.  Today (Wednesday), the Divisional Crime Officer (DCO) of Trans Amadi Police Station called and told me that they have recovered the baby alive.” he said.

Speaking to journalists while being paraded, the grandmother said she did it because she was angry that the father of the baby did not pay any bride price on her daughter’s head before putting her in a family way.

She also alleged the baby’s father provided only N1000 for the hospital bills when her daughter was in labour.

She also said she was only trying to hide the news of the pregnancy from her family and father of the girl who would have blamed her for not bringing up their daughter properly, hence she was pushed into selling the baby to any one who would love and care for him.

She claimed that she received only N500, 000 for the baby out of which she gave the nurse, Pauline Umoh N100,000 for the treatment and she intended to give her daughter N50,000 to take care of herself.

The other suspect, Juliet Obianwa told reporters that she was told that the baby is from an Orphanage home and she was asked to pay One million naira to regularize the adoption processes, adding that she had been looking for a baby boy to adopt.

CP Joseph Mukan said efforts are on to arrest others involved in the crime.