Why my father demanded ‘impossible’ bride price from Ojukwu - Bianca 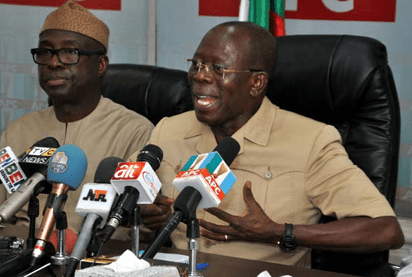 In a letter dated May 27, Shuaibu accused Oshiomhole of taking unilateral decisions on behalf of the national working committee (NWC).

Shuaibu said members of the NWC presided over by Oshiomhole hardly meet but when they meet, their final decisions are altered.

“Please don’t get me wrong, do not think I am saying these about your conduct as Chairman because I want to be Chairman. I don’t want to be NationaI Chairman, because I can not be, even if I want to, for as long as President Muhammadu Buhari is in office, having come from the same North West geo-political zone,” he wrote.

“In advanced democracies, people who fail to add value or build over and above what they met on assumption of duty show some civilized examples, they honourably bow out.

“In that connection therefore, I want to advise you to take the path of honour, to step aside and allow the Party to embark on the onerous task of reconstruction and rehabilitation in those States it was weakened by the effect of manner the last primary election exercises were conducted or even the task of recreating the party where it is on the path of extinction, arising from the loss of a sitting APC Government, for example in Zamfara State, where you directly personally created the problem leading to the painful complete loss of APC’s electoral fortunes, FROM UP TO DOWN I All these are uncontestable facts. You cannot exonerate yourself from blame on what happened to APC Zamfara State, thereby destroying the hopes and aspirations of 534,541 APC members and supporters, including my good self!”

“It is my honest opinion that your ability to ensure this party flourishes is deficient as you lack the necessary composure and you also don’t possess the capabilities and the requisite experience to run a political Party,” Shuaibu said.