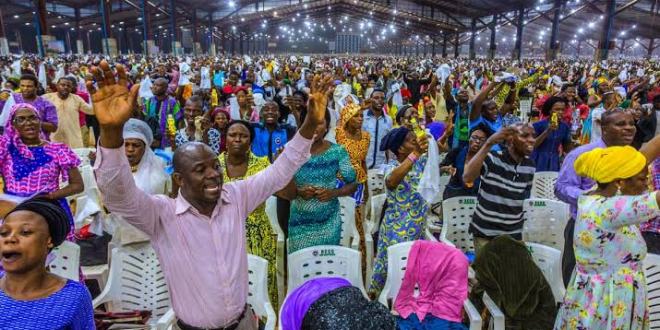 Renowned pentecostal churches, the Redeemed Christian Church of God (RCCG) and Daystar Christian Centre have announced that their annual cross-over service will be virtual.

The cross-over service is usually held by churches on December 31 to mark the end of the year and to welcome a new one. The services, most times, end by dawn.

Babajide Sanwo-Olu, governor of Lagos, had warned churches against violating the 12am to 4am curfew imposed by the federal government, as part of efforts to curb the spread of COVID-19.

As a result of this, some churches have had to adjust their cross-over services.

The RCCG, in a memo signed by JF Odesola, its assistant general overseer (admin and personnel), said the development is to ensure that none of its members violates the curfew imposed by the federal government.

It also said the January Holy Ghost service will be held virtually.

“Kindly be informed that in compliance with the Federal Government and various States government directives, the Cross Over Service shall be virtual and the Cross Over message from Daddy G.O shall be relayed through all our social media platforms as usual, “the memo read.

“You are to also note that the January Holy Ghost service scheduled to take place on Friday 8th January 2021 shall also be held virtually.”

Daystar, on its part, said its service will be streamed “exclusively online via http://live.daystarng.org and all our social platforms”.

But the Living Faith Church Worldwide led by David Oyedepo said it will hold a physical cross-over service which will start by 6pm as an evening service.

“The Cross-Over service which was earlier scheduled to hold on Thursday the 31st December 2020, shall now hold as a Evening Service,” a notice from the church read.

“Time is 6pm. Please note that in view of this, the Wednesday Midweek Communion Service shall not hold.”

Poju Oyemade, senior pastor of Covenant Christian Centre, said its cross-over service will be held physically from 7pm to 9pm at its Iganmu Centre in Lagos state.

The Mountain of Fire and Miracle Ministries (MFM) said its own service will be held physically between 9pm and 11pm.

“The leadership of this ministry has directed that, in view of the government safety and health regulations, coupled with the imposed curfew between 12am and 4am, the cross-over night service on the 31st of December, 2020, would now hold from 9pm to 11pm on Thursday,” a circular signed by Gbesan Adebambo, MFM assistant general overseer of administration, said.

Owing to the rise in the number of COVID-19 cases in the country, the federal and state governments have had to enforce new measures to curb the spread of the disease.

Large gatherings, including Christmas parties and concerts were banned. Night clubs, event and recreation centres were also asked to shut down.

The guests at wedding, seminars, conferences and other programmes have been restricted to a maximum of 50.

Related Topics:cross-over service
Up Next