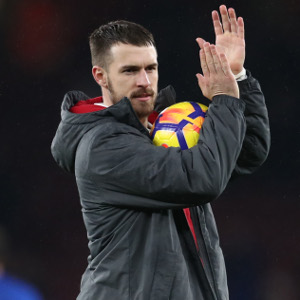 Aaron Ramsey believes the arrival of Pierre-Emerick Aubameyang and Henrikh Mkhitaryan can ensure a successful end to Arsenal’s season after the Welshman netted his first ever hat-trick in a 5-1 thrashing of Everton.

Ramsey was the beneficiary for two of Mkhitaryan’s three assists, while Aubameyang also clipped home a fine through ball from his former Dortmund teammate just days after sealing a club record £56 million switch from the German giants.

“100 percent we’ve got a player on our hands,” Ramsey said of Aubameyang.

“Well done to him, he scored on his debut, Micki as well with a few assists, hopefully there is a lot more to come and they can help us finish off the season strongly.”

Victory saw Arsenal close the gap on the top four to five points and manager Arsene Wenger was happy with the early indications from his side’s January overhaul as Alexis Sanchez, Theo Walcott and Olivier Giroud also departed.

“It is very early, but they look to have the quality to integrate into the game we want to play,” Wenger said of Aubameyang and Mkhitaryan.

“They are quick, have sharp movement and agile and want the ball. It is very good and positive signs.”

Wenger’s delight was in stark contrast to Everton boss Sam Allardyce, who raged at his side’s defending as they conceded four times in the opening 39 minutes.

“We studied how Swansea played (in beating Arsenal 2-1 on Tuesday), how defensively sound they were and how they limited Arsenal to very few chances.

“Swansea only had 30 percent possession but created chances, but I may as well have been talking in a foreign language. We didn’t implement my plans either defensively or offensively and the game was dead and buried.”

Feddal Ruled Out For Six Months With Injury