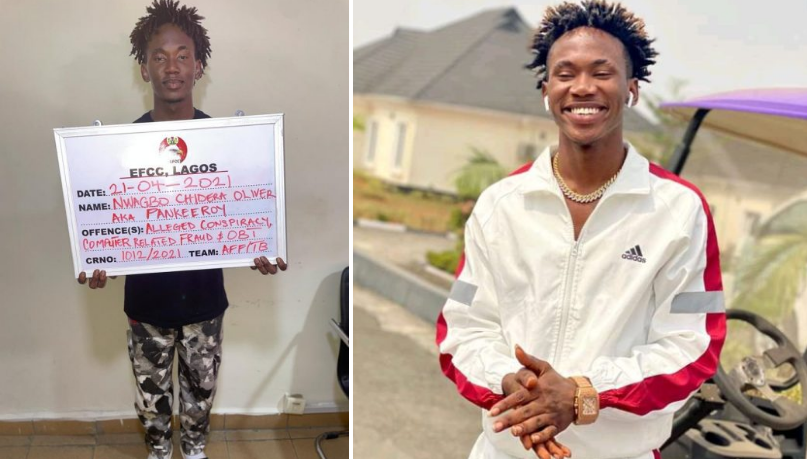 Popular Instagram comedian, Pankeeroy has been arrested by EFCC with 34 other suspects for alleged fraud.

Comedian and Social media influencer, Pankeerov was arrested by the operatives of the Lagos Zonal Office of the Economic and Financial Crimes Commission, EFCC, for alleged involvement in computer-related fraud. Pankeeroy, whose real name is Nwagbo Oliver Chidera, was paraded on Thursday, April 22, alongside 34 others.  According to EFCC, the suspects were arrested on Wednesday, April 21, at their hideout in James Court, Lekki, Lagos, following verified intelligence received by the Commission about their alleged criminal activities.

The commission said in a statement that, Chidera, who claimed to have gone into a Bitcoin scam after he suffered depression, had been presenting himself as a vendor who redeems bitcoin vouchers using the bitcoincoretrading.com platform to defraud his unsuspecting victims. A Mercedes Benz AMG GLE model worth N36,000,000 was recovered from him upon his arrest, and it was also revealed by the commission the suspect has N22,300,000 worth of Bitcoin in his blocked chain account. Items recovered from the suspects include exotic cars, iPhones, laptop computers, Android devices, and Macbook devices.

Singer, Barry Jhay in tears as he claimed he has’t gotten over the death of his late boss, Kashy Godson