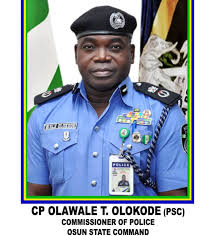 The Osun State Police Command has  found the body of missing Obafemi Awolowo University(OAU) student, Timothy Adegoke, and arrested six suspects in connection with the case.

According to the command’s spokesperson, Yemisi Opalola, on Monday, Adegoke was a Master’s degree student of the university and had come from Abuja to sit for an examination at the OAU distance learning centre, Moro, Osun State, when he went missing.

He said, “The remains of the student has been found. The Commissioner of Police, Olawale Olokode, wishes to assure the general public, especially the family of the deceased, students and management of Obafemi Awolowo University that, the state police command is working to unravel the circumstances surrounding the death.

“Recall that a case of missing person was reported on November 7, 2021 around 4.30pm at the Edun Abon Police Station and later transferred to State Criminal Investigation Department.

“The detectives from SCID of the command swung into action and arrested six suspects in connection with the case. The body has been found while investigation is ongoing.”