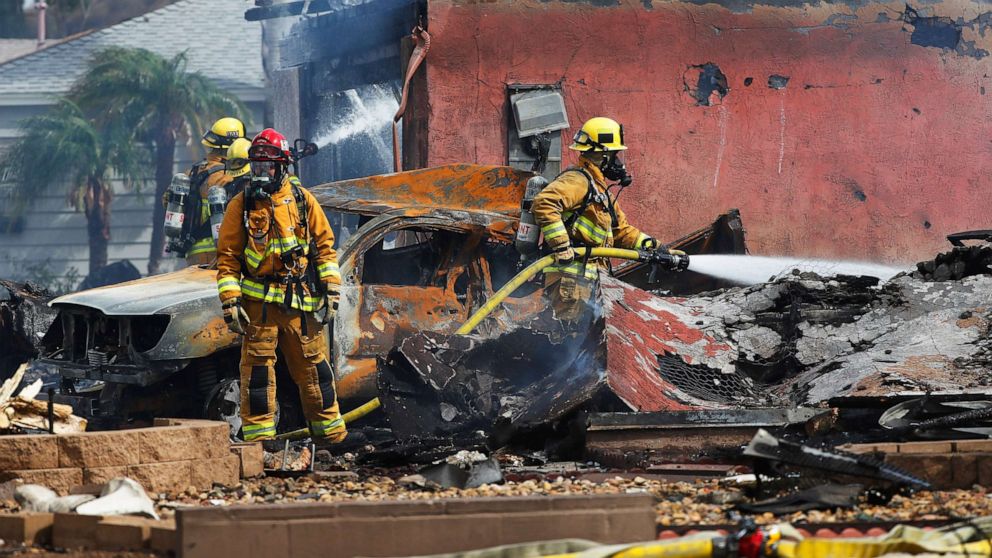 On Monday, a medium aircraft has crashed blocks from a high school campus near San Diego, instantly killing at least two people and injuring two others, while also destroying homes, officials and local media said.

Not less than two homes appeared to have been destroyed by an ensuing fire, the city of Santee, California, where the crash occurred, said on Twitter.

The plane, a C340 twin-engine Cessna, was headed to Yuma, Arizona, from Montgomery Field in San Diego.

But it had issues and was trying to land at Gillespie Field, which is near the high school, when it crashed, according to NBC San Diego.

It was not immediately clear how many people were on board the plane.

Several vehicles were burned, but firefighters were able to put out the blaze before it spread to other houses.

Two deaths were confirmed and two other people were taken to a hospital.

Among the dead was a UPS driver. At least two others were injured, reported San Diego Tribune.

Witnesses described a retired couple being rescued from one of two homes that were destroyed in Santee, a largely residential suburb of 50,000 people.

Ten other homes were damaged. Several vehicles, including a UPS delivery truck, were also torched.

“Not to be too graphic, but it’s a pretty brutal scene,” Justin Matsushita, Santee’s deputy fire chief, said as firefighters searched the smoldering ruins.

United Parcel Service of America Inc. confirmed one of its workers died.

“We are heartbroken by the loss of our employee, and extend our deepest condolences to his family and friends,” the company said. “We also send our condolences for the other individuals who are involved in this incident, and their families and friends.”

The condition of the two injured wasn’t immediately known.

No one was home at the other house that was destroyed, which sold only a month ago.

The plane was a twin-engine Cessna C340, according to the Federal Aviation Administration.

Santana High School, located three blocks from the crash, said on Twitter that all its students were “secure.”

The San Diego County Sheriff’s Department said a few streets were closed because of the crash and that the Federal Aviation Administration and the ​​​​​​​​​​​​​​​​​​​​​​​​​​​National Transportation Safety Board would be handling the probe into the incident.

Further details on what led to the crash were not immediately available.

“It’s a pretty brutal scene for our guys and we’re trying to comb through it,” a deputy chief with the Santee Fire Department said.

Related Topics:californiafeaturePlane crashes
Up Next