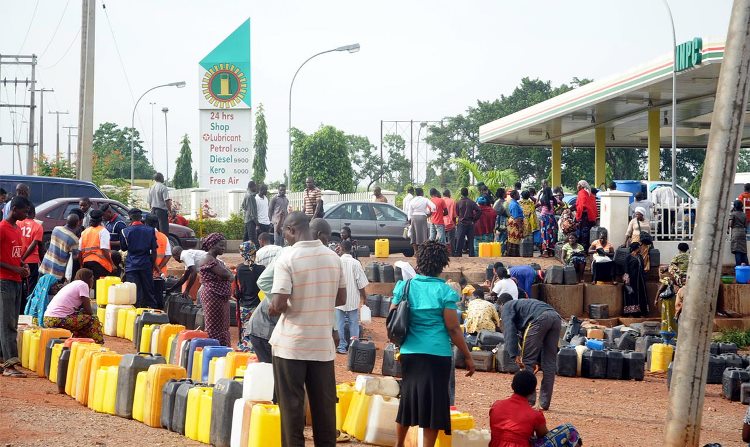 Petrol scarcity, on Tuesday, in Abuja and neighbouring Nasarawa and Niger states continued and gave rise to more than 100 per cent increase in transport fares in several locations of the affected areas.

Similarly, a few hundred black marketers of petrol appeared in several roads in Abuja and vicinities, as they sold the product at between N300 to N500 per litre.

Petrol scarcity, on Tuesday, led to serious queues by motorists in front of the few filling stations that supplied the product.

Furthermore, transport fares were increased by commercial transporters; for example, the fare from Zuba, a border town between Abuja and Niger, to Berger, which used to be between N250 and N300, was raised to N600 on Tuesday.

Also, cab drivers in the Abuja city centre hiked their rates by over 100 per cent, collecting over N1,000 for distances that they formerly accepted between N500 and N700.

Responding to the turn of events, oil marketers disclosed that the supply of petrol by the Nigerian National Petroleum Corporation (NNPC) had been inaccurate.

The National Public Relations Officer, Independent Petroleum Marketers Association of Nigeria, Ukadike Chinedu, said, “We’ve had distortions in petrol supply and it’s like there is not enough product now, but NNPC recently said it had about 40 days’ stock.”

Chinedu told Top Naija that though NNPC had claimed that there was no plan to increase petrol price in March, several marketers were still in doubt.

He stated that independent marketers were not getting petrol at the approved ex-depot price of N148 per litre from depots; also many IPMAN members obtained the product at between N160 and N162 per litre.

“If you buy your product at N162 per litre, will you sell at N162, N165 per litre as approved by the government? That is the issue; so tell me, why won’t there be price increase?” Chinedu asked.

NNPC spokesperson, Kennie Obateru, had claimed that there was no increase in ex-depot price and that the corporation was not making such proposition in March.

The Nigerian National Petroleum Corporation and oil marketers had continually called on the Petroleum Resources Department, the regulator of the sector, to take drastic measures on depots that were selling petrol above the official ex-depot fee.