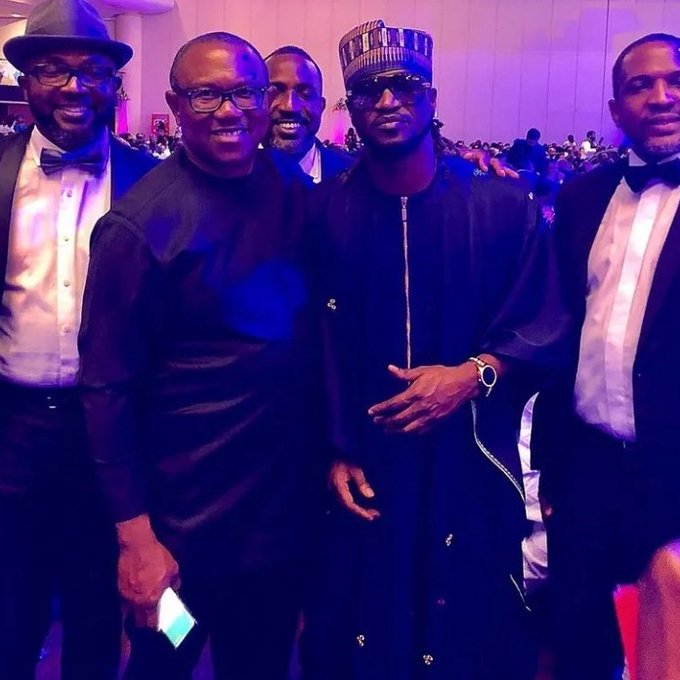 With so much hype over the 2023 general elections, and with aspirants popping up left and centre, so many online drags and jabs are being thrown.

One was thrown at Labor Party aspirant, Peter Obi by Nigerian journalist and celebrity; Dele Momodu as a result of the former Anambra Governor’s vying for the Presidential seat.

But celebrity and former P Square member, Peter Okoye has come to the backing of the Labor Party Presidential aspirant on his social media handle.

The music star challenged the angle from which Dele Momodu claimed in his interview with TVC that Peter Obi cannot win the 2023 presidency, particularly in the Labor Party.

The media man argued that the Labour Party had no structure or money and questioned if Peter Obi was ready to spend his hard earned money to fight Atiku and Tinubu.

The singer in his tweet, challenged that the 2023 elections unlike the party primaries was beyond delegates considering a whole lot of Nigerians would troop in en mass to control the outcome of the elections.

Peter Okoye added by accusing the current ruling party of intentionally creating hardship in the country so it can easily buy people to support them.

“With all due Respect Sir Mr Dele Momodu! Yes Peter Obi might not have the money and structure! But he has the Youths, The Masses and The People now!. The truth is that we the people are the structure. We are many and we are powerful, We are Obi-deint, we cannot be distracted”

“It is now beyond d delegates. D masses will control d outcome of d election. Will they vote for the candidate who paid delegates thousands of dollars to emerge as a candidate or vote for Peter Obi who has plans to change Nigeria from consumption to production?”

“You people don’t understand the, hardship and abject poverty that will hit us if Peter Obi doesn’t win. It’s not about the North or South here, it’s about who will save us, the country is crumbling in all sectors, people are dying unnecessarily, all this rubbish must stop”

“They intentionally create hardship for the people, so that they can easily buy people over to support them in a time like this! Are you people not tired of suffering? Is Nigeria of today satisfactory for you? Don’t fall for these same mind games again”

“Pls one more thing Sir Mr Dele Momodu, With all the Money and structure that other Political Parties has or have! Where has it taking Nigeria to? We need Pure CHANGE! And Peter Obi is that change! And now a Threat to all of them all! Sorosoke”

“We are just getting started sir Pls can somebody give me a chilled bottle beer, Dear Nigerians and the Youths! This is  not about the North or South here, We are no longer interested in party politics, But the qualities of the candidate! if we miss this opportunity! We might never get it again.” The musician wrote.

Pele has a word for Vladmir Putin