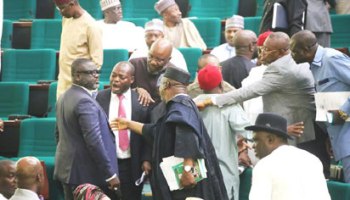 Members of the House of Representatives elected on the platform of the opposition Peoples Democratic Party, PDP have staged a walkout from the chamber while in plenary. Their decision was prompted by the defection of Hon. Nnanna Igbokwe from Imo State who announced his defection from the party to the ruling All Progressives Congress, APC.

Members of the opposition party had raised several points of order including a reference to a supreme court judgment to stall the movement but it failed.

The lawmakers subsequently started protesting while some of them left the plenary session.

The remarks however, were deflated by Speaker Yakubu Dogara on another provision of the 1999 constitution as amended.

The PDP caucus in solidarity with members of All Progressives Grand Alliance, APGA and Labour Party, LP said they were heading back to court to seek reinterpretation of the Supreme Court judgment on member’s defection especially when there is no division in his or her political party.