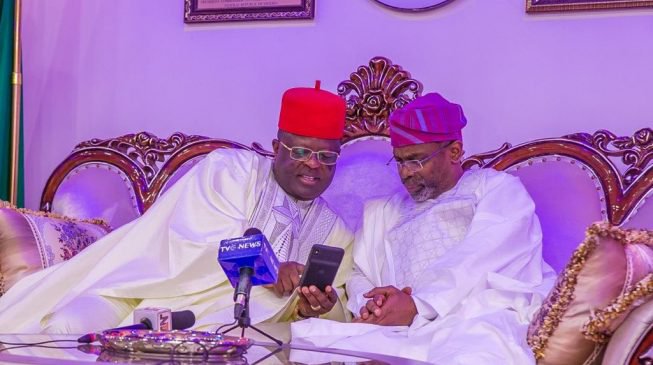 Ebonyi state governor, David Umahi has endorsed Femi Gbajabiamila, majority leader of the house of representatives, as speaker of the lower legislative chamber in the 9th assembly.

Umahi, a member of the Peoples Democratic Party (PDP), endorsed the All Progressives Congress (APC) lawmaker when he received him at government house, Abakaliki, the state capital, on Tuesday.

Accompanied by some lawmakers, including Abdulmumin Jibrin, spokesman of his campaign, Gbajabiamila visited Ebonyi to solicit the support of Umahi.

The governor urged Gbajabiamila to carry every member along in the 9th assembly irrespective of party affiliation.

“This visit is the first of its kind and that’s the way it should be; we should deemphasise party affiliation because it is capable of denying us the development we needed as we continue to define everything along that line,” Umahi said.

“That is why we should pursue whatever that can tie us together. When you get there, let’s de-emphasis party affiliation, let’s work for the country because no section can do it alone, we need one another for the survival of this country.”

Umahi said since the south-east does not enjoy a majority status in the legislature, it has to align with others to realise its goals.

“I can assure you that there’s little the (south-east) region can do but align with the majority but your consultation is welcoming because it shows that other parties have something to offer,” he said.

“People may want to ask what is in it for south-east in all of this because key leadership positions have eluded the region, but I believe if you can’t beat them, join them because we don’t have majority and there’s little we can do if we pull out.

“We need to realise that south-east is an integral part of this country and must be carried along. It takes two tango and we have a brighter future together.”

During the campaign of the 2019 general election, Umahi directed at least 2000 people to welcome President Muhammadu Buhari to the state.

He also mobilised crowd for the president’s rally at the Pa Ngele Oruta stadium, Abakaliki.

Umahi later told reporters that he took the action because the president deserved to be accorded all necessary courtesy.

“Now, the crowd you saw there at the stadium, 2,000 of them, were from me because I know they (the APC) have nobody,” he had said.

“But for it not to seem like Ebonyi people don’t love Mr. President, I had to make available 2,000 persons to come and cheer the president.

“That is why if you check the crowd, while they were castigating me unduly, the crowds were not clapping’, the people were not happy. But for the respect they have for Mr. President, they could have booed them. I had to do what I did because I’m not into extreme politics; I’m into politics for development.”

Fake soldier who brutalized Baba Fryo has been arrested