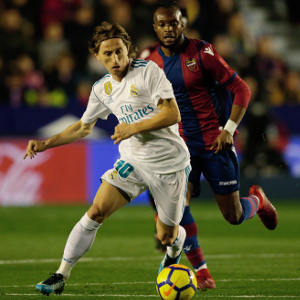 Sergio Ramos headed the visitors into an 11th-minute lead with his 50th La Liga goal for the club, but Levante equalised before halftime through Emmanuel Boateng.

Isco came off the bench to put Real back in front late on, but Pazzini stunned the struggling defending champions with an 89th-minute strike on his debut.

“We controlled the game, especially in the first half, and in the second we managed to do the hard part – get back into the game and score the second goal,” said Zidane.

“Then we should have been ready, we could have avoided the second goal, but we didn’t and it’s hard because it’s two dropped points.”

The Champions League is Real’s only realistic chance of more silverware this season, but they’ll need to find a significant upturn in form to challenge Paris Saint-Germain in the last 16, first-leg tie in Madrid on February 14.

“We have to work even more, it’s football and the opponent is there to try to put you in difficulty,” Zidane added.

Barcelona can move 21 points clear of their arch rivals with victory at Espanyol on Sunday, when second-placed Atletico Madrid welcome third-placed Valencia to the Wanda Metropolitano.

Real didn’t take long to forge ahead at Levante, as centre-back Ramos met a Toni Kroos corner with a downward header which home goalkeeper Oier fumbled into his net under pressure from Karim Benzema.

They almost doubled their lead just after the half-hour mark as Oier managed to scramble the ball away from Cristiano Ronaldo after spilling Kroos’ tame strike.

But Levante hit back in the 42nd minute as 21-year-old Ghanaian Boateng marked his fourth league start for the team with his first La Liga goal.

Jose Luis Morales ran through on goal as Ramos found himself caught out of position, and although Keylor Navas saved his effort, Boateng met the loose ball with a cool finish into the far corner.

The away side continued to look frail at the back and were lucky not to fall behind as Morales led another rapid counter-attack from a Real corner which ended with Navas making a sprawling save to deny Jefferson Lerma.

The reigning European champions improved after Isco replaced Gareth Bale midway through the second half, with the Spain midfielder shooting straight at Oier and Benzema having an effort deflected wide.

Isco’s introduction did pay off with only nine minutes remaining, as Benzema capitalised on some sloppy defending and pulled the ball back for the 25-year-old to smash home his fifth league goal of the season.

Levante should have equalised in the 85th minute, but substitute Roger contrived to head wide with the goal gaping from only a couple of yards out.

The home side did snatch a point, though, as Pazzini scored less than 11 minutes after coming off the bench to make his debut.

The 33-year-old, who only joined on loan from Verona on Wednesday, easily got in behind the hapless Real defence and slotted into the far corner to pull Levante three points clear of the relegation zone.

Sevilla’s push for a top-four finish and a Champions League place took a massive dent earlier on Saturday, as they were thrashed 5-1 at Eibar.

Chilean international Fabian Orellana scored twice as Eibar moved up to seventh, just one point and one place behind Sevilla.

Fifth-placed Villarreal had Daniele Bonera sent off in the first half in a 2-1 defeat by Real Betis, as Betis forward Loren Moron scored twice on his debut after being promoted from the reserve team.

Alaves pulled five points clear of the bottom three as former Barcelona man Munir El Haddadi scored what proved to be the winner in a 2-1 victory over Celta Vigo.

Allardyce Rips Into His Players’ Performance