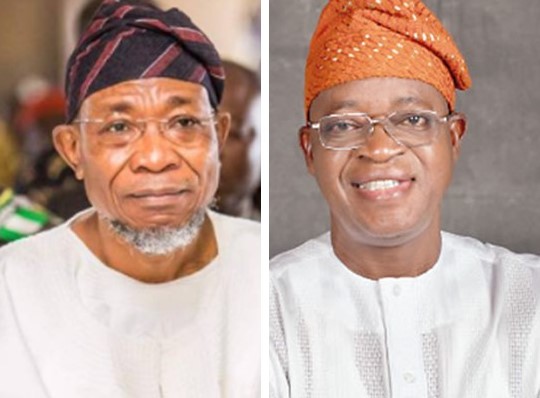 The Osun All Progressives Congress caucus in the National Assembly has announced cancellation of a lecture titled, ‘Ten Years of Uninterrupted Progressive Government in Osun’ that has pitched the ex-governor Rauf Aregbesola against the incumbent, Adegboyega Oyetola.

After incumbent Olagunsoye Oyinlola was declared the winner of the 14 April 2007 elections, Aregbesola immediately proceeded to the courts to overturn this outcome.

In May 2008, Aregbesola called over 100 witnesses and tendered 168 exhibits in his petition before the Election Petitions Tribunal, alleging violence and ballot box stuffing in the election.[16] In an October 2008 interview, he described Oyinlola as “a bully who came from a reactionary military arm”, stating that Oyinlola had done nothing for the people of Osun state. He also claimed that 12 people had died in the election violence.

In August 2009 the police arrested Aregbesola, apparently for involvement in the alleged forgery of a police report on the conduct of the elections