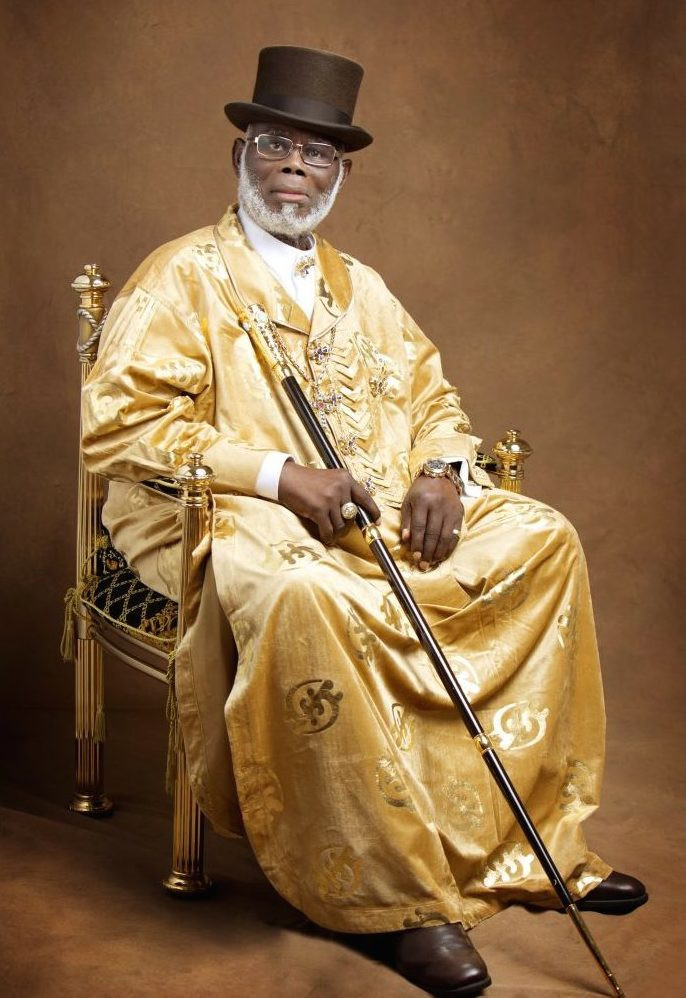 After over two years after his demise, late business mogul, philanthropist, and industrialist, High Chief Olu Benson Lulu-Briggs will be finally laid to rest on March 13, 2021 according to an announcement by the Oruwari Briggs House of Abonnema in Akuku-Toru local government area of Rivers State.

Until his death, the late Lulu-Briggs was also the Paramount Head of Oruwari House of Abonnema.

But for controversies and litigations that trailed his demise, including legal tussles in Nigerian and Ghanaian Courts over where the deceased truly died and taking possession of his mortal remains, the oil and gas industry player would have long been buried.

The outbreak of the coronavirus pandemic and subsequent restrictions by the federal and state governments as regards funerals and large gathering further elongated the final burial rites.

Chief Dumo Lulu-Briggs (middle) joined by the Acting Head of Oruwari Briggs House and members of the Oruwari Brigss Council of Chiefs at the press conference.

Addressing a press conference at Abonnema on behalf of the Oruwari Briggs House, Barrister Ibim Dokubo stated that when on December 23, 2019, a High Court in Ghana ruled that the body of the paramount head be released to the family led by Chief Dumo Lulu-Briggs, the matter was appealed up to the Supreme Court before the body was finally brought on March 16, 2020, in the midst of Covid-19.

He said: “It is our pleasure at this point to break the news that the late High Chief Olu Benson Lulu-Briggs, OON, DCF, DSSRS, the Iniikeiroari V of Kalabari Kingdom and Paramount Head of Oruwari Briggs House of Abonnema will be committed to mother Earth on Saturday, March 13, 2021.

“The major reason we could not plan the burial ceremony was because for more than fifteen months we could not take custody of the mortal remains of High Chief O.B. Lulu- Briggs because of the series of Court cases that denied the family from taking custody of the body. The controversy surrounded the demise of our Paramount Head was widely reported in the media.

“Even when on December 23, 2019, a High Court in Ghana ruled that the body of the monarch be released to the family led by Chief Dumo Lulu-Briggs, the matter was appealed up to the Supreme Court before the body was finally brought on March 16, 2020 into the waiting arms of the prevailing Covid restrictions.

“The overwhelming view was we needed to wait for the relaxation of the Covid-19 restrictions because High Chief O.B. Lulu-Briggs was a man of many parts, who had positively touched many lives.

“He was a public servant, a labour leader, a politician, a businessman, a philanthropist par excellence and a very High Chief. It would therefore be a gross disservice to his memory to deny his legion of friends and associates the opportunity to honour him at his funeral.”

According to him, a broad-based burial committee has been set up to actualize the “mandate of giving out patriarch the honour that he very well deserves.”

Also speaking, son of the deceased, who is also the head of Young Briggs House and O.B Lulu-Briggs family, Chief Dumo Lulu-Briggs commended the Governor of Rivers State, Nyesom Wike for his untiring efforts at resolving contentious issues and for also approving a state burial for their father.

According to him, their late father represents so many diverse interests that it is only fitting that he be given a befitting burial of his status, especially as people are expected from different parts of the world.

Kidnapped Auxiliary Bishop of Owerri and his driver regain their freedom

#FreeSowore trends as Omoyele Sowore, other activists get arrested in Abuja