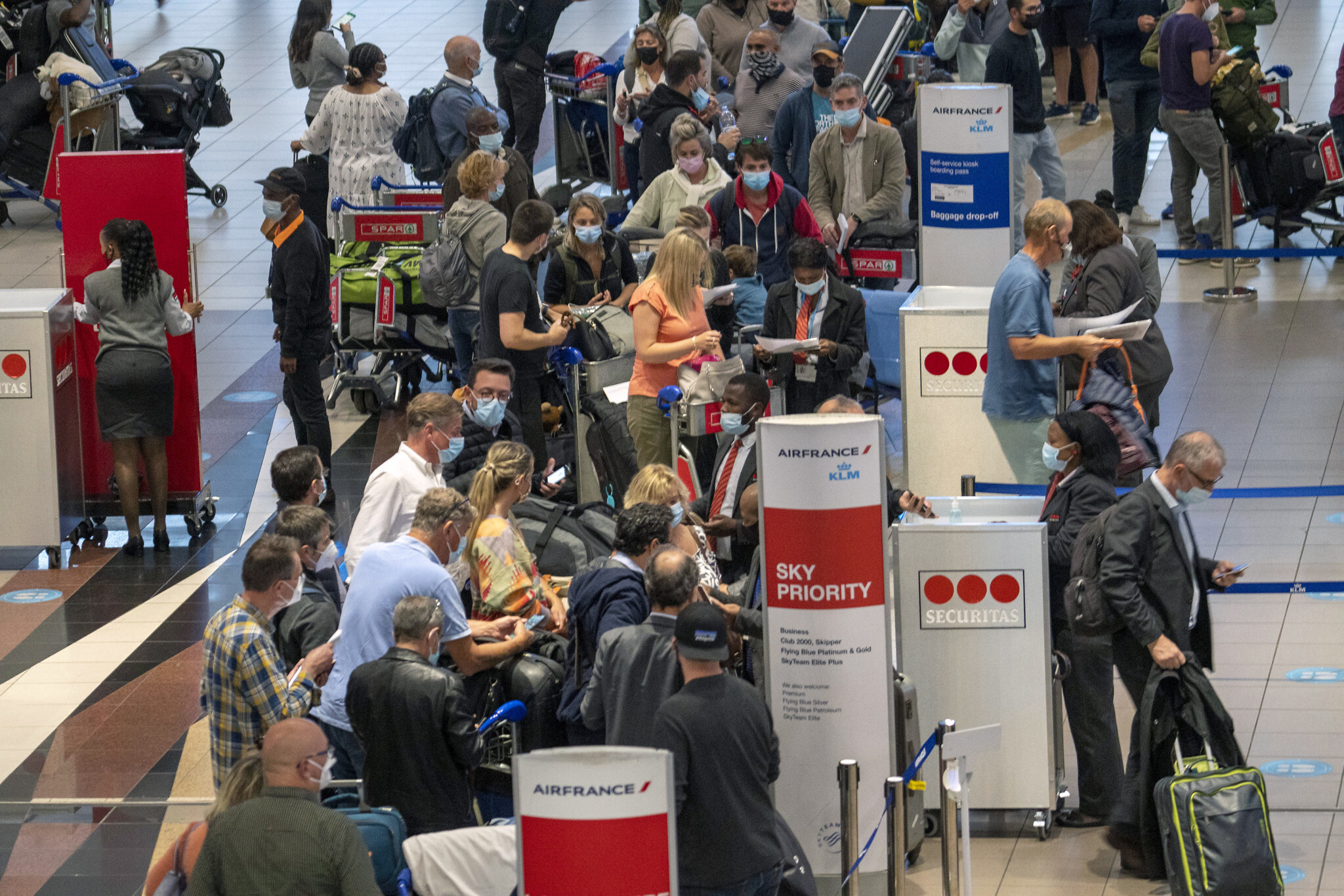 Nigerian state governments are set to resume and increase mass testing for COVID-19 following the detection of the Omicron variant of the virus in the country,  TopNaija reports.

Top government officials in states including Cross River, Benue, Delta and Akwa Ibom who disclosed this, however, described the funding as a major obstacle to community testing.

They sought the assistance of the Federal Government on funding of community testing, particularly running of molecular laboratories.

The states made the demand as the World Health Organisation said the new variant had spread to 23 countries.

Canada had on Sunday detected the Omicron variant in two travellers, who recently visited Nigeria.On Tuesday, the North American included Nigeria, Egypt and Malawi in its travel ban list.

The Nigeria Centre for Disease Control  on Wednesday announced the discovery of cases of the Omicron variant in three persons with travel history to South Africa.

It said contact tracing on the cases had started, adding that the affected persons were in isolation.

But virologists expressed fear that the strain was already circulating in the country, but could not be detected because most states had stopped community testing.

On Thursday, Cross River State said it had begun community testing in the wake of  the discovery of the Omicron variant. The state Commissioner for Health Dr Betta Edu, disclosed this to one of our correspondents on  in Calabar.

She stated, “We have already resumed community sample collection and massive vaccination. However, vaccine hesitancy and high cost of running molecular laboratories have been part of our challenges.”

She added that the state had already requested the Federal Government’s assistance in that regard.

Also, the Benue State Commissioner for Health and Human Services, Professor Joseph Ngbea, said that the state had stepped up  the testing rate.

The commissioner said that the state action committee on COVID 19 had evolved a new strategy to test people  following the discovery of the new variant.

He explained that the state had continued to fund the COVID19 committee, which had started going to churches, mosques, schools and internally displaced persons’ camps to conduct the test. He said, “We have stepped up testing capacity of people for COVID 19 in  Benue and we are very high now. We target  schools and churches and some people who want to be tested do send for us and we do meet them and get them tested.”

He called on the Federal Government to increase budget for research to be able to tackle the spread of COVID -19.

The Delta State Government, on its part  said   it would resume testing immediately to check the spread of the Omicron variant.

The state Commissioner for Health, Dr More  Ononye ,stated this in an interview with The PUNCH on Thursday in Asaba. He said, “We will resume testing because it is proper that we maintain the tempo in curtailing the spread.

“For a long time now, people have stopped observing the COVID-19 protocols but with this, it is a wake-up call to everybody especially this Christmas season.

“So we are advising communities to wake up for the use of all these interventions. We are doing more sensitisation for people to get vaccinated because there is a lot of complacency.”

Ononye said the state was expecting technical and other forms of assistance from the Federal Government to stop the spread of the virus.

The Akwa Ibom State Commissioner of Health, Professor Augustine Umoh, said although the state would step up testing, funding was a major challenge.

Umoh stated, “In Akwa Ibom State, we never stopped community testing. What we probably need to do is to ramp up testing.

“The challenge to any activity is funding especially in the light of the reality of limited resources. More consumables would be needed and the people re-awakened to the reality of COVID-19.”

The commissioner said the state needed assistance in form of funding from the Federal Government.

He mentioned the things needed to include laboratory consumables, funds for public health enlightenment and medication amongst others

Also, speaking to one of  our correspondents, the state epidemiologist,  Dr Richard Ikweagu, said that the state had enough kits.

In Enugu, the State Government  said that there was no a time the state stopped community testing.

The Commissioner for Health Dr Ikechukwu Obi, who spoke to one of our correspondents on telephone on Wednesday, said that government was encouraging people to go to any primary health care facilities to get tested.

The Ondo State Government said it had been taken measures to prevent the spread of the pandemic in the state.

The state Epidemiologist and member of the state Inter-Ministerial Committee on  COVID-19, Dr Stephen Fagbemi said there was no cause for alarm on the issue of the new wave of the disease, noting that the kits and vaccines were abundantly  available for the people of the state

He said, “ Testing has not been stopped in Ondo State and we also not intend to stop vaccination because unless you vaccinate people, they can never be protected . The state is forging ahead in the vaccination campaign, the communities and some other places.

He also stated,   “The kits are available, the test is free of charge and the vaccination is still available free of charge. We are only appealing to our people to be vaccinated, we can’t force them to take the vaccines. The Federal Government provided the kits for us because they are the one bringing the kits to the country to avoid adulteration.”

Meanwhile, three months after Nigeria received her first consignment of the Johnson and Johnson vaccine, the Federal Government has yet to begin the deployment of the vaccine to rural areas and security compromised areas as promised.

This development comes at a period when the World Health Organisation said that vaccine hesitancy in rural areas in Nigeria was fuelling circulation and giving rise to variants of concerns such as the Omicron variant of  coronavirus.

The Executive Director of the National Primary Healthcare Development Agency, Faisal Shuaib in an interview with journalists had said that the vaccine would be deployed in rural areas, hard to reach areas, riverine areas, desert areas and security compromised areas.

But the WHO  Africa’s immunisation coordinator, Dr Richard Mihigo while fielding answers to journalists during the WHO African regional press  briefing on Thursday, said that vaccine hesitancy in rural areas was giving rise to hesitancy concern.

He stated, “The situation is not just in Nigeria, we have seen similar situations in Democratic Republic of Congo, Ethiopia and South Sudan where in general, the remote areas their vaccination drive has not been good. The consequence of this low vaccination coverage is obvious, it is leading to a large proportion of population naive to protection and the risk of exposure is quite great.

“The consequence of all of that is what we are now witnessing and what the WHO has been saying since day one.”

In a related development, the Nigerian Correctional Service and the Nigeria Security and Civil Defence Corps have directed their officers and men nationwide to take the COVID-19 vaccines jab.

The paramilitary agencies said it was compulsory for their personnel to take the vaccination in compliance with the vaccine mandate issued by the Federal Government last October.

The Presidential Steering Committee on COVID-19 led by the Secretary to the Government of the Federation, Boss Mustapha, had directed that federal workers without proof of COVID-19 vaccination or test results done within 72 hours would be denied access to their offices starting from December 1 (Wednesday).

But the NCoS spokesman, Francis Enobore, a Deputy Controller of Corrections, explained that the CG of Corrections, Haliru Nababa, had earlier issued a circular to all formations on compulsory vaccination for all NCoS personnel, adding that a deadline had yet to be given on the issue.

Enobore added that a deadline would be issued in the reminder that would be sent to the correctional formations nationwide.

He said, “Recall that the Controller-General did not waste any time; immediately the Federal Government gave the directive on COVID-19 protocol which included vaccination and other preventive measures, he sent out a circular that all officers across the service should avail themselves of the opportunity to get vaccinated.

“Presently, he has also called on officers at the headquarters to brief them with a view to send a reminder to all officers across the board to ensure that they do not only present themselves for vaccination but also their families because as it is, if you live in a community where you are the only one that is vaccinated and others are not, the possibility of being a conduit of transmission is still there.”

The spokesman maintained that strict observation of preventive protocols was instrumental to the prevention of coronavirus infection in the custodial centres despite the high level of congestion.

On vaccination of inmates, the service affirmed it would undertake a compulsory vaccination of the 70,000 inmates in custody if the FG ordered all Nigerians to take the jab.

The Public Relations Officer, NSCDC, Olusola Odumosu, explained that the Crisis Management Directorate of the Corps was carrying out a sensitization campaign on the pandemic across the six geo-political zones of the country to encourage the corps personnel to take the jab.

According to him, the NSCDC CG, Dr Ahmed Audi, had directed that all the men and officers must take the vaccination in line with the FG directive, adding that the Corps boss had also taken his full doses.

The WHÖ says that the new coronavirus variant of concern, Omicron, has been detected in 23 countries.

This means every continent has at least a case of Omicron.

Speaking during a virtual briefing in Geneva, on Wednesday, the WHO Director-General, Tedros Ghebreyesus, said the number of cases was expected to grow.

“WHO takes this development extremely seriously, and so should every country. But it should not surprise us. This is what viruses do. And it’s what this virus will continue to do, as long as we allow it to continue spreading,” he noted.

Ghebreyesus said experts were learning more about the variant, “but there’s still more to learn about its effect on transmission, the severity of disease, and the effectiveness of tests, therapeutics and vaccines”.

The WHO DG urged countries to take “rational, proportional risk-reduction measures,” including those aimed at delaying or reducing spread, such as screening passengers or implementing quarantines for international travellers.

He, however, said travel bans would not prevent the international spread of Omicron, adding that they place a heavy burden on lives and livelihoods.

Ghebreyesus warned that the current “toxic mix of low vaccine coverage and low testing is a recipe for breeding and amplifying variants.”

Related Topics:featureOmicron variant
Up Next