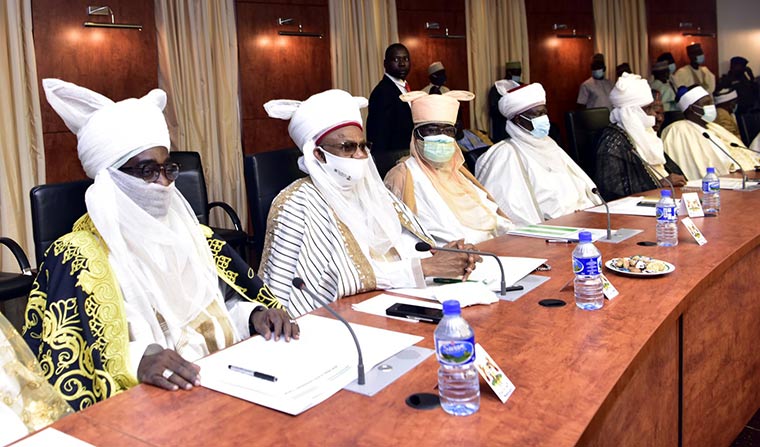 On Wednesday, highly influential northerners met in Kaduna over the state of the nation, saying some of the attacks of northerners in the South were meant to provoke the region.

The pan-Northern socio-political organisation, the Arewa Consultative Forum, made the assertion at a northern summit organised by the Professor Ango Abdullahi-led Northern Elders’ Forum which was held at the Arewa House, Kaduna.

But southern groups including Ohanaeze Ndigbo and Afenifere, criticised the ACF’s position. This was just as the Chairman of the Northern Elders’ Forum and former Vice Chancellor of the Ahmadu Bello University, Zaria, Ango Abdullahi, said the region would not vote for anybody along ethnic line in 2023.

Abdullahi noted politicians that would be voted for must have the socio-economic development plans for the region irrespective of tribe and religion, adding that those who care for the people before, during and after elections would have their votes.

The former VC, who is the convener of the northern people’s summit on barriers between the people and their leaders, said the region must, “think out of the box and elect new sets of leaders who will do a lot better than the current ones.”

Abdullahi also admonished those agitating for the breakup of the country to have a rethink as according to him, secession was not a solution to any grievance.

He urged the Federal Government to take seriously issues of threat to disintegration of the country.

He also said Boko Haram and Fulani bandits were not problems of the North, but threat to the Nigerian nation.

He, however, noted that those who thought that they could solve the criminality among elements of Fulani through ethnic cleansing, made a terrible mistake.

He also said using restructuring as a threat of bargaining tool for accepting zoning would destroy the imperatives of restructuring and imperil the country.

Abdullahi said, “Northern voters have supported three southerners, Abiola, Obasanjo and Jonathan to victory in the past, two of them against Northerners. Northern voters are enlightened and conscious of their responsibilities. They have learnt, perhaps at greater cost than most Nigerians, that ethnicity and faith alone do not make good leaders. They will not accept to be further weakened so that they abandon the same rights all Nigerians enjoy.

“Those politicians who want Northerners to vote in a particular manner should soil their boots and convince Northerners how their candidates will improve security, economy and society in the North and the country. Using restructuring as a threat or bargaining tool for accepting zoning will destroy the imperatives of restructuring and imperil the country.

“Politicians and leaders who desire to lead need to understand that Nigerians are watching what they do in their immediate constituencies that will entitle them to ask for our support. We should speak frankly and directly to the rest of Nigeria on this issue.

“Politicians who cannot impose their influence on irredentists that threaten our corporate existence and the lives and livelihoods of our fellow northerners stand on very thin ground in our estimation.

“Politicians who cannot or will not influence public sentiment which demonises our fellow northerners and leaves them open to attack will not weigh much in our consideration as leaders under whom we will feel safe and secure.”

The ACF’s Deputy Chairman of ACF, Senator Ibrahim Ida, who made the position of the northern body known, said the region must ensure that nobody takes it for granted.

He stated, “We are the fabric holding Nigeria together. We are being provoked by the incessant attacks on northerners in the South. We must therefore ensure at the end that nobody takes us for granted or underestimate us. Let us change the template, portray our interest in the way we want it.”

He also said that, the North required internal cohesion through elite consensus, as the region was presently at a crossroads considering its numerous woes.

“The North is at a crossroads. We really need internal cohesion through elite consensus of what the North stands for, the resources available and what we want to achieve.

“We have enemies within and we need to turn them around and make them see things our own way. There is absence of inclusion in the way we run our affairs,” he said.

On his part, a former Speaker House of Representatives, Alhaji Ghali Umar Na’abba, said, “Lots of people are eligible to contest but not suitable to lead. Leadership is not for everybody, It’s not an-all-comers affair. Leaders must possess so many virtues.

“In 1999 when I realised that there was an agenda against the North. ,I did everything possible to ensure it didn’t succeed but it was among our governors that I met the stiffest opposition.”

The Secretary General of the Yoruba Council of Elders, Dr Kunle Olajide, disagreed with the assertion, saying it was wrong to say that southerners were attacking northerners to provoke them.

The YCE chieftain said, “ If f that is the summary of what they said there, I don’t agree with them. What we have witnessed in the last six years is obvious. The gross insensitivity of this present administration to the cries of southerners in Nigeria is glaring.

“The nepotistic attitude of Buhari government is enough to further polarise the country. So, there is no attack against the northerners and nobody is saying that all northerners are bad. What we are saying is that this administration is insensitive to the Federal Character Clause in the constitution and has no regards at all for other parts of Nigeria in his appointments. Because of that, the country cannot move forward and this is the result of the 1999 Constitution.”

The IYC President, Peter Igbifa who stated this in a statement sent to one of our correspondents, stated that the statement was amusing and contrary to the current realities in the country.

Igbifa referred the group to the statement earlier credited to Senator Shehu Sani on the state of the nation.

The IYC President quoted Sani as saying: “The only region that is comparatively peaceful is the South’ that is why the heart of the country is still beating, despite the bloodshed and violence in the other regions. We should all be grateful.”

The pan-Yoruba socio-political organisation, Afenifere declared that there was a need for the other geo-political zones of the country to produce the next President come 2023.

The National Secretary-General of the association, Bashorun Sehinde Arogbofa, who spoke with one of our correspondents, said it would be unfair for the northerners to hold on to power, saying that power was not an exclusive possession of any part of the country.

The apex Igbo socio-cultural organisation, Ohanaeze Ndigbo described the alleged killing of northerners in the South as baseless.

It wondered if it was the Igbo that massacred over 20 Igbo natives in Ebonyi communities last week. Ohanaeze spokesperson, Chief Alex Ogbonnia, spoke with one of our correspondents on telephone. While denying the alleged killing of Northerners in the South, Ogbonnia said that Igbo had attained decent civilization.

He stated, “it is not part of our culture to kill. We respect the sanctity of human life. Igbo don’t kill rather Igbo are very hospitable; very accommodating; they welcome strangers of all sorts and allow people of diverse ethnic groups to transact their businesses in their land. What Igbo admire is ingenuity and hard work. In Igbo we don’t advertise killing, it is not part of our tradition and culture, rather we talk about ingenuity.”

“In Ebonyi State the Fulani invaded communities and massacred Igbo natives. At Iga community in the Uzo-Uwani Local government, Fulani invaded the community killed the Igbo. Herdsmen from the North having clashes with the southerners. Why are they turning it upside down?”

On the voting partner in 2023, Ohanaeze spokesman said, “Nigeria will start moving well when you place competence and record of accomplishment before appointment into sensitive positions.

“If recruitment process is based on competence and record of accomplishment Nigeria will move well. But as long as we give priority to ethnic, and religious sentiment what you hear and see in Nigeria will continue. So we have two options – it is either we bring people with competency in the position of authority or we go on with religious and ethnic sentiment and continue the way we are saying. I want to believe that the greater majority of Nigerians will wish that we go with competency in an appointment so that Nigeria will become better than it is today.”