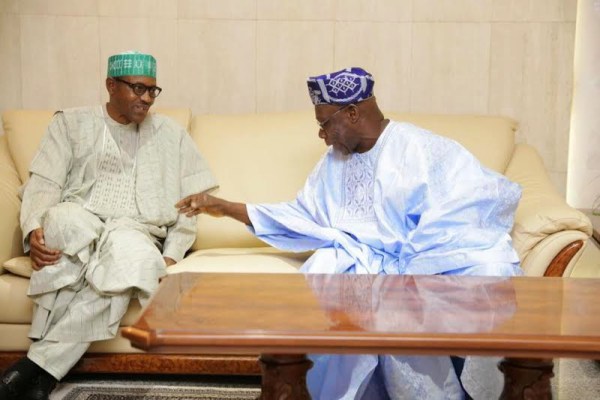 Accompanied on the visit by a former governor of Osun State, Olagunsoye Oyinlola, the former president, it was gathered, arrived the Abuja House on on Saturday, around 9.00 p.m. to the embrace of Buhari.

A source close to both Obasanjo and Buhari said the two leaders shared some courtesies even before entering the house, with Obasanjo reportedly telling Buhari that he was happy to see him fit again.

Buhari, who was said to have expressed gratitude for the visit, also told Oyinlola, ‘Excellency, you are looking really fine,’ with both Obasanjo and Oyinlola reportedly replying that they were happy to see that he (Buhari) was looking fine too.

‘After the exchange of courtesies, Buhari and Obasanjo left for another room in the house where they held a 40-minute meeting,’ the source said.

Though details of the meeting were still sketchy as of the time of filing this report, the authoritative source told the Nigerian Tribune that the meeting was ‘likely on the developments in the country.’

The leaders were said to have come out of the meeting a few minutes before 10.00 p.m., following which the former president and Oyinlola were seen off by President Buhari.

There have been various visits to the president with recent reports saying he would return to the country very soon.

Before this, the national chairman of the All Progressives Congress (APC), John Odigie-Oyegun, led some ministers and about four governors of the party to visit the president with one of the governors, after the visit, telling reporters that Buhari would return when his doctors said so.

Would you judge this lady’s deed to her husband right or wrong?