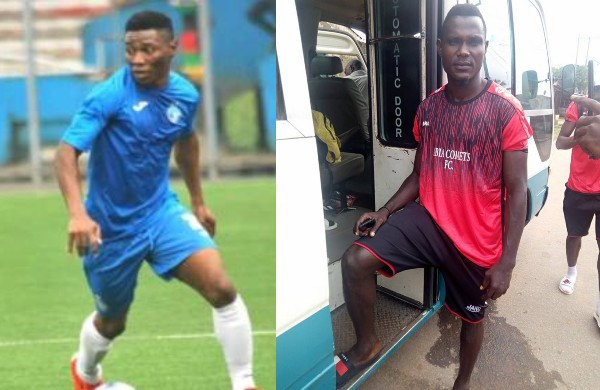 Enyimba FC player, Dayo Ojo and Abia Comets footballer, Benjamin Iluyomade who were kidnapped on Sunday, March 22 at Ipele, along Benin–Akure road have regained their freedom.

The footballers were reportedly kidnapped while on their way to Lagos after their teams went on vacation due to the coronavirus pandemic.

Enyimba FC official twitter handle confirmed that their player has regained his freedom. The club wrote;

Our midfielder man, Dayo Ojo has regained freedom from his kidnappers

Though it is not clear if a ransom was paid, it was however gathered that the kidnappers reduced the ransom to N20m after an initial demand of N100m.

“Enyimba midfielder Ekundayo Ojo and Abia Comets’ Benjamin Iluyomade, who were kidnapped on Sunday have regained their freedom.

“The footballers were released on Wednesday night following combined efforts of Enyimba Football Club and families of the players.

“It would be recalled that the footballers were kidnapped along the Benin-Owo expressway as they journeyed to Akure following the suspension of the Nigeria Professional Football League amid concerns over the global pandemic, Covid-19.

“The players have since reunited with their families.”