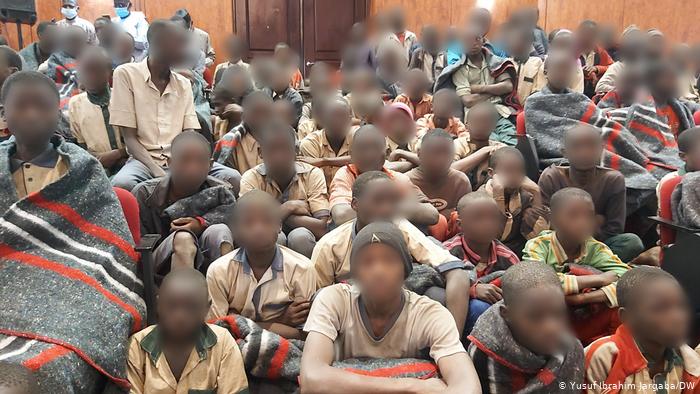 Tearful joy and celebration filled the air as 27 kidnapped students of the Federal College of Forestry Mechanisation, Kaduna were reunited with their families after 56 days in captivity.

Tears of joy flowed freely from both parents and their children.

At about 3pm, the entire premises of the college, located along the Kaduna International Airport, opposite the Nigerian Defence Academy, erupted in jubilation as the students were being escorted by heavily-armed policemen in company with the state Commissioner for Internal Security and Home Affairs, Samuel Aruwan, and the state Commissioner of Police, Umar Muri.

“The bandits need prayers. All that we have to do is to pray for them for God to touch their hearts. As for me, I have forgiven them for whatever we went through in their hands. The experience was hell.”

A female student, Sarah Sunday, said she and her colleagues were subjected to all sorts of dehumanising conditions, including not being allowed to take a bath while in the bandits’ den.

Asked if they were fed at all, Sunday said, “The boys used to go and fetch water for us to cook. We cooked tuwo with miyan kuka, and tuwo with dry okra. We only cooked rice once, and we cooked spaghetti once too.”

When asked whether the abductors used to leave them to go out for other operations, Sarah said, “Yes, they used to go out, but they always left some of their armed members to stay with us.

“Even our male colleagues who used to go and fetch water were always escorted to the stream by gang members bearing AK-47 rifles.

“Our living condition in the jungle was very bad. We never had a bath. We were exposed to the rain. Athough there was a hut that we always ran to hide whenever it was raining, still there was no escaping the rain because the hut was poorly built. But we have forgiven our kidnappers. And we pray that God will give them the chance to change for the better.”

Also speaking, a freed student, Pamela Ibrahim, said the bandits said their grouse was with the government and vowed to unleash hell on Kaduna State.

Ibrahim said, “Before they released us, the kidnappers told us that they didn’t have anything against us (students). They said they kidnapped us because they needed the government to settle things with them and that they also wanted to be educated like other Nigerians. They need work and houses too.

“They said if the government doesn’t settle with them, they would continue to make sure that Kaduna State is unsafe. They said they meant it. Some of them are Nigerians, others are foreigners. They spoke mainly Fulani (language) and Hausa.

“There was an old man among them who prevented others from harassing us and anytime he was not around, we were beaten and insulted.”

In a jubilant mood, one of the parents, Ibrahim Hassan, said he was glad that his daughter was freed few days to her elder sister’s wedding.

Hassan said, “I was confused; my life was miserable throughout the time my daughter was with the kidnappers. I only depended on God.

“When I heard that some of the students of Greenfield University were killed, I became sad thinking that I would never see my daughter again but when I learnt they had been released, my joy knew no bounds, especially as her elder sister’s wedding comes up in Zaria tomorrow (Saturday). It is double joy for me.”

Another parent, Mr Friday Sanni, said before he could allow his two daughters – Victory and Rejoice – to return to the college, he must be assured of adequate security in the school.

Sanni said, “The truth remains that if my children must come back here, I must be sure that there is a serious security structure on the ground, that this kind of incident will not happen again.

“If in few months’ time nothing serious is on the ground, I will move my children out, because they are too dear to me.

“The first one will be 20 years old by September while the second one will be 18 by November. They are too dear to me to lose and I will not want this kind of experience again. I have never experienced this kind of situation before in my life.”

Speaking, the state Commissioner of Police, Umar Muri, said the freed students had undergone medical tests and were fit to be reunited with their parents.

“As we speak, the victims are all clinically stable,” he said.

He urged the students not to allow their ordeal to discourage them from pursuing their education.

Speaking on the process leading to their release, Muri said, “The federal and the state governments as well as the acting Inspector-General of Police, the state police command, the military and other sister security agencies adopted the best modus operandi at our disposal and 10 of the students were first released on April 5 and 8 in two batches.

“With this sustained effort, the remaining 27 kidnapped students were subsequently released to the command on May 5, at about 4.10pm without any casualty.”

The police commissioner said concerted efforts were being made to also secure the release of the abducted students of Greenfield University, who had been in captivity since April 20.

The Provost of the college, Dr Muhammad Bello, who received the students, appreciated all those involved in the process to get the students released.

“You should not be discouraged from pursuing your dreams,” Bello told the students.

Related Topics:Kaduna students
Up Next