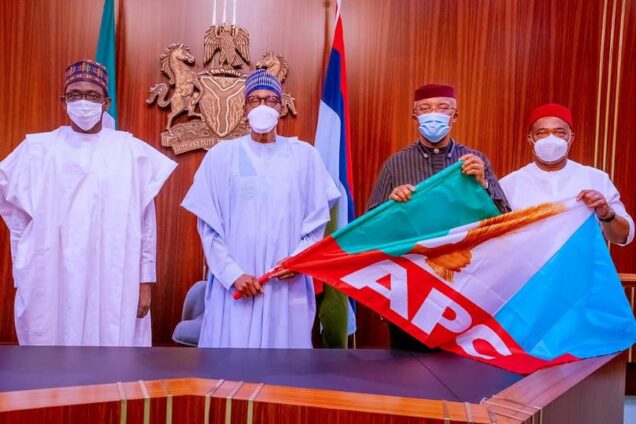 Okeke defected to APC at the presidential villa, Abuja, on Wednesday.

Okeke’s defection comes less than a month to the November 6 governorship election in Anambra.

Willie Obiano, Anambra governor, had recently alleged that members of APGA in the state house of assembly were induced to join APC.

The governor said some of the lawmakers were given N100 million each to defect.

“Any time, any day, there’s no other party in Anambra. Only APGA, there’s no APC,” he had said.

“Those people that went to APC, they went to collect money because they saw the additional money, N100 million each, they are still APGA, they are giving us information on what is happening in APC.”

Okeke first served as Anambra State Commissioner for Economic Planning, and again as Anambra State Commissioner for Works and Transport in the administration of Governor Peter Obi and later went back to immerse himself in academia as lecturer and head of department of economics at Nnamdi Azikiwe University, Awka Born into the family of R.N. Okeke, in Enugwu-Ukwu, Okeke holds a Ph.D in Monetary economics.

Related Topics:Nkem Okeke
Up Next