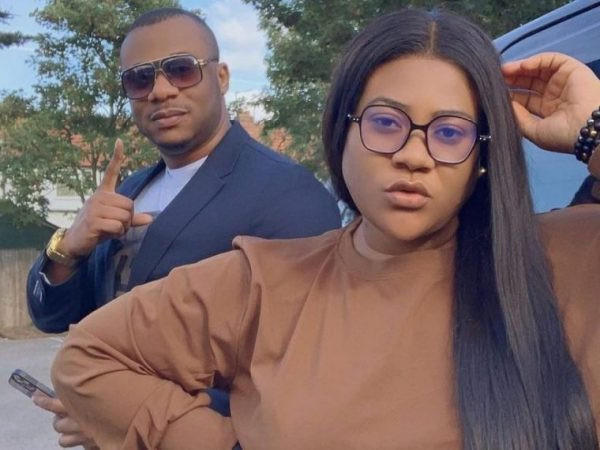 Controversial Nigerian actress Nkechi Blessing Sunday‘s ex, Opeyemi Falegan, has tendered a public apology to her. His apology comes a few weeks after they dragged each other on social media after their breakup.

In their hot exchange online, the once celebrated couple smeared each other’s names as they made accusations and counter-accusations against themselves.

In an interview with OAP, DaddyFreeze, Opeyemi asked the actress to forgive him for their public breakup. He admitted that he ”messed up” in some ways and stated that he ”had to move on”.

He asked her for forgiveness and even said he doesn’t mind kneeling down to apologize to her.

Watch the video of Falegan apologizing below…

Meanwhile, the Nollywood actress, Nkechi Blessing Sunday, in return, slammed her ex Opeyemi David Falegan after he apologised to her for their messy breakup.

Reacting, Nkechi said Opeyemi is losing relevance which is why he’s apologising to gain relevance with her name. She added that he’s only using the clout to attract women into his DM.

The actress then shared a photo of her and her ex, actor Mike Adeyemi, and hailed him as an ex who keeps his mouth shut after a breakup.

She added that she can “never” get back with Opeyemi Falegan.

Nkechi Blessing Sunday is a native of Abia, a state in the South East region of Nigeria. She had her primary education at Olu Abiodun Nursery and Primary school, Lagos and her secondary education at Barachel Model College, Lagos.

She did a six-month diploma in theatre arts at the Lagos State University, and studied International Relations at Houdegbe North American University